My Life in Kyoto

12:00am, January 1st, 2009. Bronze temple bells rang throughout the ancient capital. This is our 4th such celebration since moving here. The year 2008 saw meetings with remarkable people, innovative food and architecture, and further exploration by bicycle and on foot of a city that continually reveals itself. Again, here is my annual update of “Life in Kyoto.”

One year ago, January was a very snowy month in our neighborhood in the foothills. Snow fell almost every day but usually melted by noon. Here is the view from my 2nd floor study, with the river below. 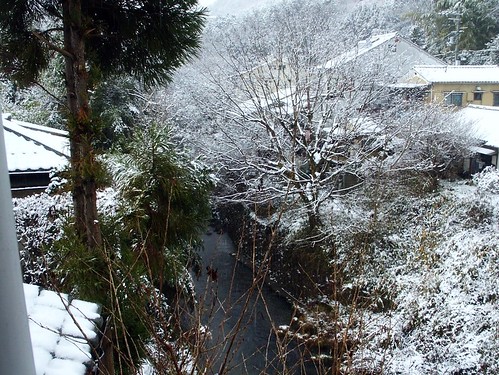 I began the month of January at hatsugama, the first Tea of the year. Dozens of my fellow tea students gathered in kimono for contemplation and discussion and a chance to hold in their hands treasures of ceramics, lacquer, bamboo, wood and paper, usually only seen in glass museum cases. Our group includes potters, master chefs, garden masters, authors, tea sweet makers, yuzen kimono artists, a violist, monks, gallery owners, a kimono dealer, architects, a master carpenter and a former woman pro-wrestler.

As each delicate kaiseki lunch course was presented before us, various participants took turns moving from member to member, filling our sake cups, making warm-hearted conversation and adding camaraderie to the New Year. 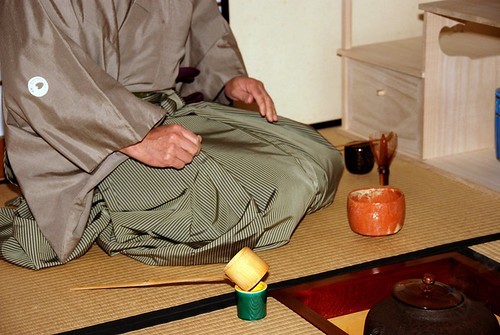 I often attended abbreviated Tea events, where each month a different host from somewhere in Japan brought his/her treasured collection of bowls, iron kettle, scrolls, vases and tea caddy for us to enjoy. All of the lids from the wooden boxes that house each of these Tea implements were laid out so the artists’ signatures written in calligraphy could be inspected by guests, beforehand.

On three sides of the city, Kyoto neighborhoods extend right up to the foot of wooded mountains. We live on the northern edge. Monkeys frequently visit our street from the woods. One day early last spring, I sat at my desk and actually watched a monkey climb up the side of our neighbor’s house, open a second story window and go in. I tried contacting the neighbor, but they were not home. I later heard that monkey caused little damage, but heartily filled up in the kitchen.

During green and misty June, I traveled to Oomori-cho, a small town in western Japan, with my old friends David Allen (best-selling author and creator of GTD, Getting Things Done) and his wife/colleague Kathryn. It was there that David gave a seminar for the Gungendo clothing company, who are also dear friends. The Gungendo people restored a dilapidated, eyesore of a town into what David aptly referred to as “the finest combination of esthetics and consciousness I have ever seen.” By supporting local farmers, mom & pop spinners, dyers and weavers, Gungendo has almost single-handedly saved them from bankruptcy due to the influx of cheap mass produced foreign textiles, and have created a line of clothing of extraordinary quality and design. 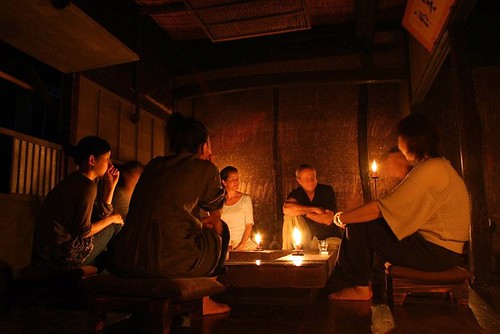 After the seminar, we chatted in the 200 year old community house.

In June, I finally visited my friend Saito Masamitsu-san for the first time since he restored an Edo-era farmhouse in his birthplace, Tochigi Prefecture. The wood, thatch, paper and mud house, surrounded by vegetable fields, is the perfect setting to showcase Saito-san’s obsession: one-of-a-kind Japanese bamboo flower baskets.

Late on most summer afternoons, I rode my bike up the road to Kurama-dera, a 1200-year old Buddhist complex built in stages, on the side of a tall, forested hill, screeching loud with frogs and cicadas. I then climbed hundreds of steps to the top. The best part of the two hour roundtrip course was descending at dusk when the path was lit up by soft, dim, amber-colored lanterns.

In July, for the first time, I led a bicycle tour of Kyoto for a family of avid bikers. By avoiding main streets, we snaked back and forth across the city by way of narrow roads, alleyways and quiet neighborhoods, never seen by people in buses or cars.

On two consecutive steamy summer evenings, I rode out on a small river boat to watch fishermen with flaming torches hanging over the sides of their boats to attract fish for cormorant fishing in the cool air of the Katsura River in eastern Kyoto.

I was very inspired by the energy and enthusiasm of clients whom I guided up Mt. Fuji in August. Two of them were in their 70’s and a third, who just turned 80, stays in shape by always exercising three hours, every day. They have bicycled, kayaked and climbed mountains all over the world, including two weeks camping and climbing in the snow and ice of Antarctica. After Mt. Fuji, we hiked on the old Edo-era Nakasendo post road, into forests, past creeks and through wooden villages that have hardly changed in 150 years. We then hiked the Northern Alps, along a white water river, up a canyon beneath tall rocky peaks. We stayed at the Kamikochi Imperial Hotel, built in the 1930’s and looking like the Ahwahnee in Yosemite. On two occasions, we came into contact with groups of monkeys, sitting by the path, relaxing, nursing their babies and ignoring us. 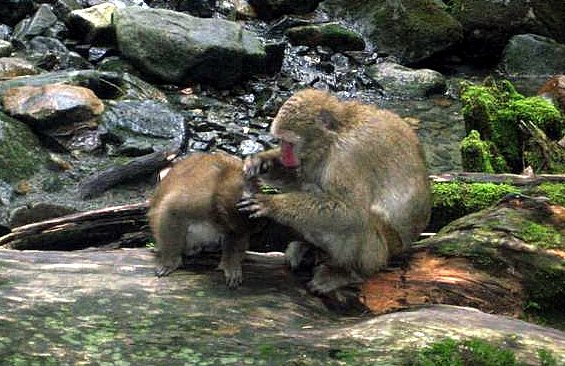 One day in September, I joined our local neighborhood’s cleaning day. Each year, everyone gathers to weed and trim the park up the block, as well as to clean the river bed that flows by our houses.

One of several trips to Tokyo this year took me to see contemporary architecture. The building called the Iceberg houses the Audi Showroom in Harajuku, and was designed by Creative Designers International. 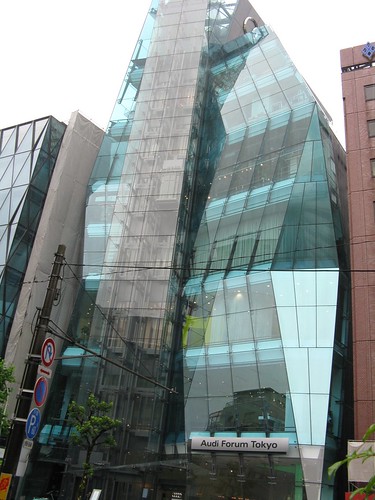 The new De Beers Building in the Ginza, was designed by Matsui Jun. 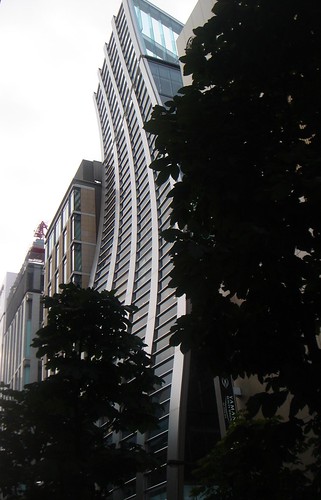 In October I spent a couple of days at Koya-san, a 1200-year old Shingon (esoteric sect) Buddhist monastery town in the mountains of Wakayama. The high altitude had turned the town’s trees red and gold, about one month earlier than Kyoto. I wandered in the afternoon through a museum and centuries’ old halls and gates. That night, I stayed in a highly polished wooden temple-lodge, dined on a feast of vegetarian temple fare and slept well. The next day, I rose early to join in vigorous early morning sutra chanting services. We then huddled in a small, soot charred room for a goma fire ceremony, set to a pounding taiko drum. With perfect posture and composure, the tenor, baritone and bass monks chant for a full hour every morning.

Of my many museum visits in 2008, I most recall two exhibitions. The first was of Japanese, Chinese and Korean masterpiece ceramics at the Museum of Oriental Ceramics in Osaka. The second was of raku tea bowls by Raku Kichizaemon, the 15th generation pottery master of the Raku family. It was held at the Sagawa Art Museum, a contemporary site designed with strong historic references and appearing to float in a large pond.

Of many food experiences, my restaurant of the year was IIjaren. Run by a young couple in their restored merchant house, their frequently changing, highly innovative menu included such dishes as sashimi salads, tiny, deep-fried pumpkin croquettes doused with thick tamari, homemade sesame tofu and a highly addictive potato salad.

I ended 2008 in Kyoto with my last Tea lesson of the year at 700-year old Daitoku-ji Zen monastery. During the lesson I heard heavy rain falling on the wooden veranda of the tearoom. After class, I crossed the semi-formal entry garden. The long foot path was brightly lit by the full moon shining through quickly moving clouds. I continued walking past mud walls, the dark, wooden, tile-roofed Buddha Hall, the massive two-story, vermillion San-Mon gate to the area where my bicycle was parked. The year-end air was icy fresh and delicious. It brought with it much anticipation for life in the ancient capital, in 2009. 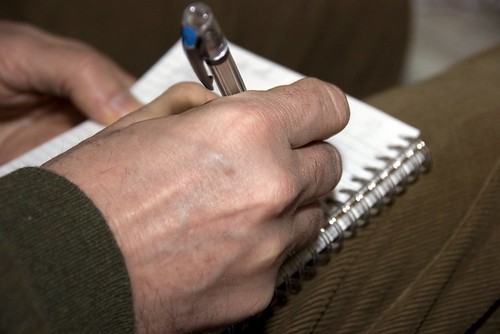