Setsubun is literally a break between seasons and occurs several times during the year. But the setsubun that is noted on calendars today in Japan is on February 3. In China and many other places in Asia it corresponds to the start of the lunar New Year. In Japan since the switch to using the Gregorian calendar at the start of the Meiji period (1869), Setsubun is celebrated quite apart from Osōgatsu (New Year activities), which came to a close in mid-January.

Rituals developed around setsubun to insure that evil would be left behind in the old year, and good things could (and would) happen in the year to come. In Japan, oni monsters personify bad things and are traditionally expelled by shouting and by
throwing dry-roasted soybeans (mamé maki). In the spirit of good fun, school children get to pelt their oni teachers and office workers shower their oni bosses with beans.

Want to make your own setsubun commotion? Buy already roasted daizu (dried soybeans) called iri mamé (“roasted beans”) in an Asian grocery… or roast your own. Place daizu (dried soybeans) in a dry skillet and place the skillet over low heat to s-l-o-w-l-y roast them. Jiggle and/or swirl the skillet gently to keep the beans in motion until the skins on a few beans begin to split (about 20 minutes). Remove the skillet from the stove and let the beans cool in the skillet (they will keep for several weeks and make a great beer snack….). 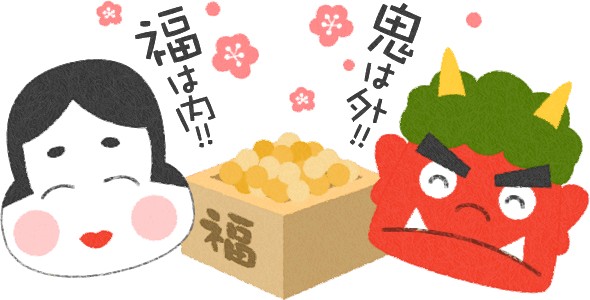 Take a handful of the beans and throw them outside while shouting Oni wa soto! (Demons, get out!). They then throw another handful inside, shouting Fuku wa uchi! (Good luck, come in!). Finally, everybody gets to eat roasted beans, the same number of as their age… plus one. Its a good thing I LOVE iri mamé… 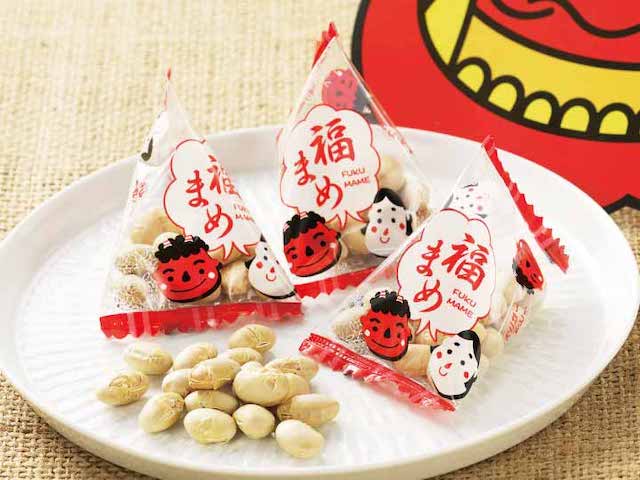 Small packets of roasted beans are for sale at this time of year — makes tossing, gathering up and clean-up so-o-o-o much easier!