Watermelons are ancient — 4000-year-old wall art in Egyptian tombs include images of elongated, green-striped melons. Cultivation spread across Asia and Europe and was brought to the Americas by colonists and the slave trade from Africa.

On the Asian continent, watermelons can be traced through India, China (Uighurs) and into Japan possibly as early as the 8th century AD. The first definitive written record was in 1696, a comprehensive catalog of agriculture (Nōgyō Zensho) where the fruit called suika was written with calligraphy for “west” and “melon” 西瓜.

The image above is a detail from a woodblock print by Utagawa Hiroshige (1797-1858) that depicts yatai (food stalls) in Edo (the former name for Tokyo). Note that wedges of suika watermelon were being sold!

Japan’s gift-giving culture is at the heart of its luxury fruit industry. Novelty items such as square watermelons first came on the market about 50 years ago. This year a single square ribbon-festooned melon fetched a price of ¥15,000 (about $135 at today’s exchange rate). Zentsuji (Kagawa Prefecture) is where nearly all such melons are grown.

Who thought to grow square melons and why? Tomoyuki Ono of the Zentsuji Agricultural Cooperative is credited for developing a melon that easily fits shipment boxes and is easy to store in small home refrigerators.

How are square watermelons grown? Not fully grown melons are “caged” and complete their growth in square cages. 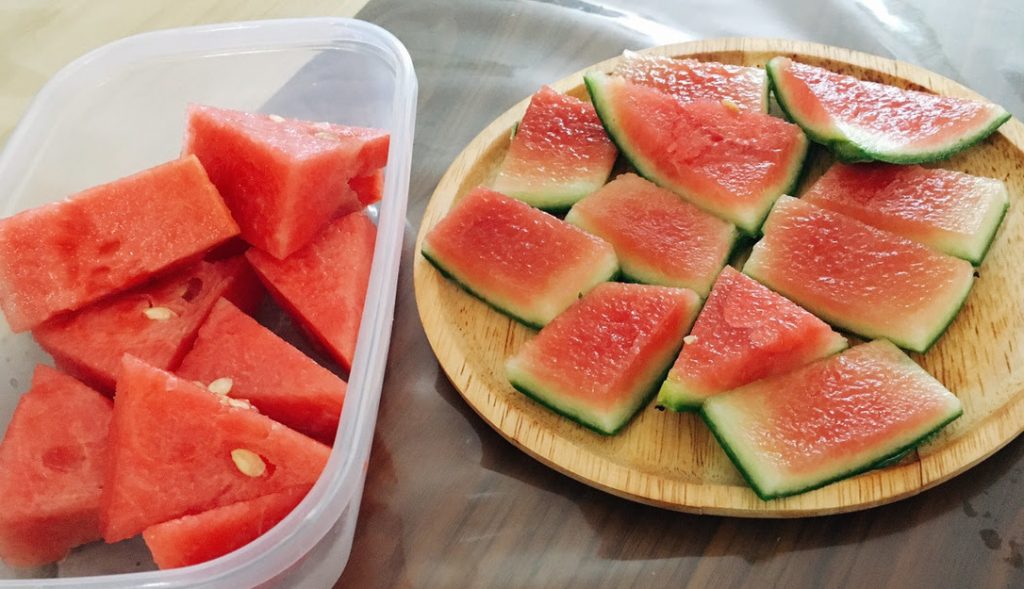 Visit my Kitchen Culture blog for more about watermelon.