Memorial to the late Honjo Soji: A Master Acupuncturist and Moxibustionist

My doctor in Japan for many years, HONJO Soji was a true master of moxibustion. Below, I re-post my article from 2009.

I used to think that all doctors’ offices were located in medical buildings with names like New West Professional Plaza and a pharmacy on the first floor, a huge parking lot and long carpet-tiled corridors lined with doors reading Chiropractor, Proctologist or Geriatric Dentistry. Well, Japan has similar medical buildings, and similar perky receptionists in starched white uniforms. But though modern medicine in Japan is on par with developed western countries, my chosen main doctor is located in a tiny room, deep with Kyoto’s Gion Geisha district, on a narrow street, just north of Kenninji Monastery. I can smell the moxa herbs burning about half a block from his door. 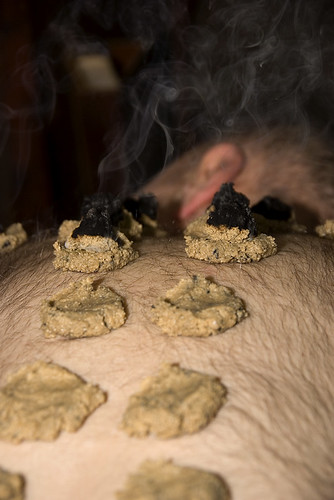 Dr. Honjo inherited his unusual technique from his grandfather, which makes him the 3rd generation practitioner to work in that room with the moxa-smoke-blackened ceiling. His use of acupuncture needles is limited to diagnosing. When the flesh is supple, the needle slips right in and further treatment is not necessary in that spot. The tougher the area, the more difficult it is for the needle to be inserted. That is where his special treatment is especially effective. The treatment involves rice polishings that have been stewed into a granulated, slightly viscous substance. With this he creates neat little mounds and places them on the tightest parts of the body, beginning with the back. Then he plops down a lump of moxa on the top of each mound and lights it. Though moxa has been used in Asia for over 2000 years, generally burned directly on the skin for one or two seconds per point, by burning it on top of the viscous mounds, Honjo-sensei does it very slowly, so the heat penetrates the body for about ten minutes.  And, unlike standard moxibustion, it isn’t painful.   Ten minutes on the back followed by ten minutes on the left side, the right side and sunny side up. The result is that the intensely tight muscles loosen up. Besides what feels like the endorphine rush of a good deep tissue massage, blood, lymph and energy now flow freely into the area, which seems to allow the body’s natural healing to take place. 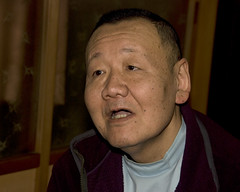 Up until a few years ago, I used to visit him once or twice a week when I was leading back-to-back tours. Though practically comatose when I entered his office, I would leave miraculously relaxed, refreshed and restored. I have also sent many travel worn and weary American clients to him over the years and have heard enough testimonials to fill a decent infomercial, which this is not.

May Honjo-sensei rest in peace.

In Collaboration with Photographer, Helen Hasenfeld