The perks and pressures of being the son of someone famous can be enormous. In Japan, with its grand artistic traditions, this not uncommon scenario often leads to either glory, (not always deserved) a decent, yet pedestrian command of the medium (often bringing wealth and fame anyway), or worse, mere imitations of mom or dad. More times than not, unfortunately, the latter is the case while the tradition stagnates, waiting for a savior. Often it takes a generation or two down the road for a vital voice to be heard again. Such is the case for the great folk-craft pottery center of Mashiko. When any Japanese ceramic buff hears Mashiko, one name inevitably blinks in the mind: Hamada. 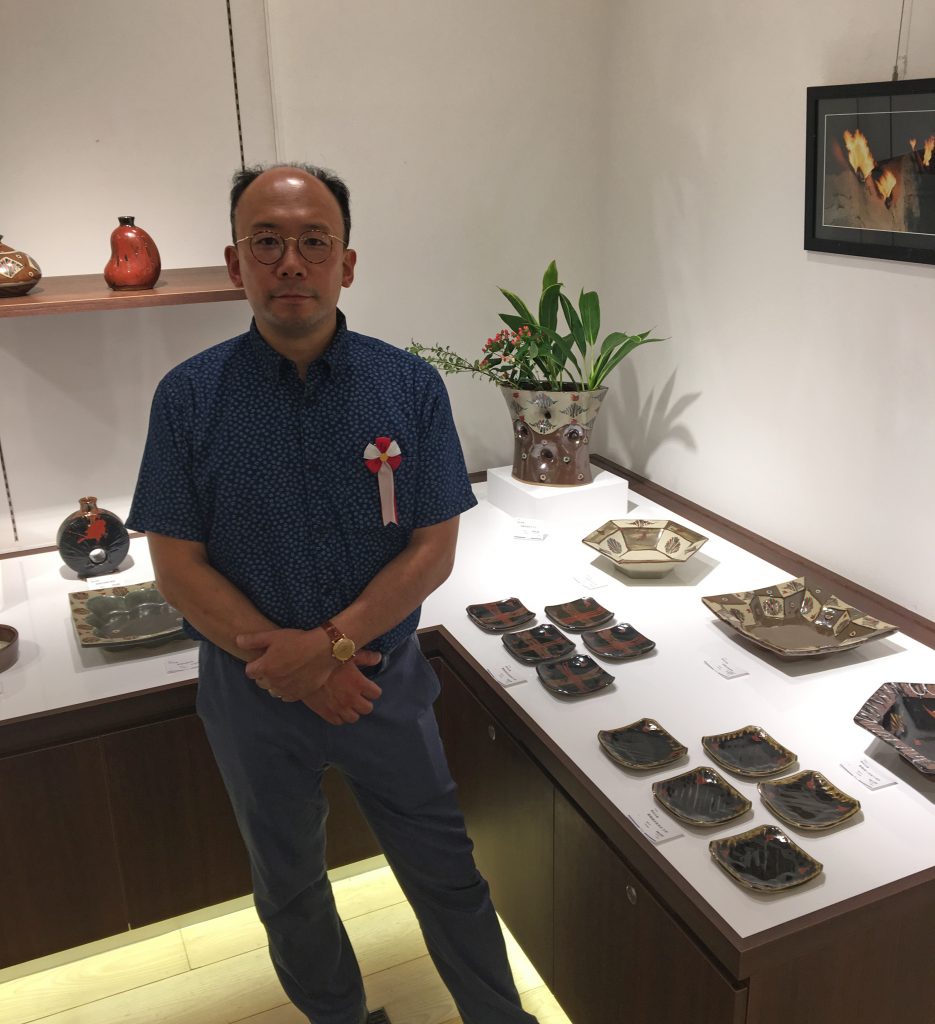 Shoji Hamada (1894-1978) was a founding member of the Mingei movement, a Living National Treasure (L.N.T.), and the person who saved Mashiko from extinction, settling there in 1924. Even today, some say that most works produced today in Mashiko should be called Hamada-yaki and not Matshiko-yaki! Though perhaps an exaggeration, it does show the tremendous and unending influence that this sophisticated ‘country’ potter had on the town.  Shoji’s son Shinsaku followed in the family trade and became a solid, gracious potter, yet lacked Dad’s smack of genius. Much of the fame of Shoji’s number one apprentice, L.N.T. Tatsuzo Shimaoka (1917-2007), was based on a rope pattern that had nothing to do with Mashiko.  He was, however, an excellent Mashiko-based potter.

Now in the 21st century, the winds of fortune are shifting for Mashiko, as Shoji’s grandson Tomoo (1967-), Shinsaku’s second son, is creating a new style for the legendary town.

Tomoo writes, “I decided to be a potter when I was 3. As I grew up, my family allowed me to decide of my own free will. I had always been interested in art in general, so I often spent time in my grandfather’s and father’s studio.”

Very common in Japan, this kind of ‘learning’ of an art occurs when working knowledge seeps into the bones by simply just being in a studio, watching and doing, and not through schooling the intellect. The art becomes part of one’s movement and soul. Tomoo used to decorate pieces when Shoji was in the glazing process. His brush was free and natural and Shoji praised the lad by saying, “He’s quite an artist because he’s a child! No one can do better than children.”

Fresh is the key word here with Tomoo’s Mashiko pots bursting with vitality and asobi-kokoro (playful spirit). The core definition of a Mashiko pot includes local clay onto which rich persimmon, earthy rice-husk, starry iron, and snowy white tone glazes are applied, amongst others. Tomoo adds to the blend his youthful sense of form with some works resembling terraced rice paddies, violins, or stacked plates. We see his asobi-kokoro at play as he creates spirals, checked patterns, diamonds, and reed motifs that add character, depth, and life to his clay creations.

Of course, Tomoo makes sturdy folk wares such as large platters, pitchers, serving bowls, tea bowls, teacups and sake vessels. Even within these everyday wares we find great joy and a sensitive artist who knows the grand tradition he has inherited and yet is not afraid to explore and take chances with new glazing schemes, such as seen on one jar in the photos with the wild action painting façade. 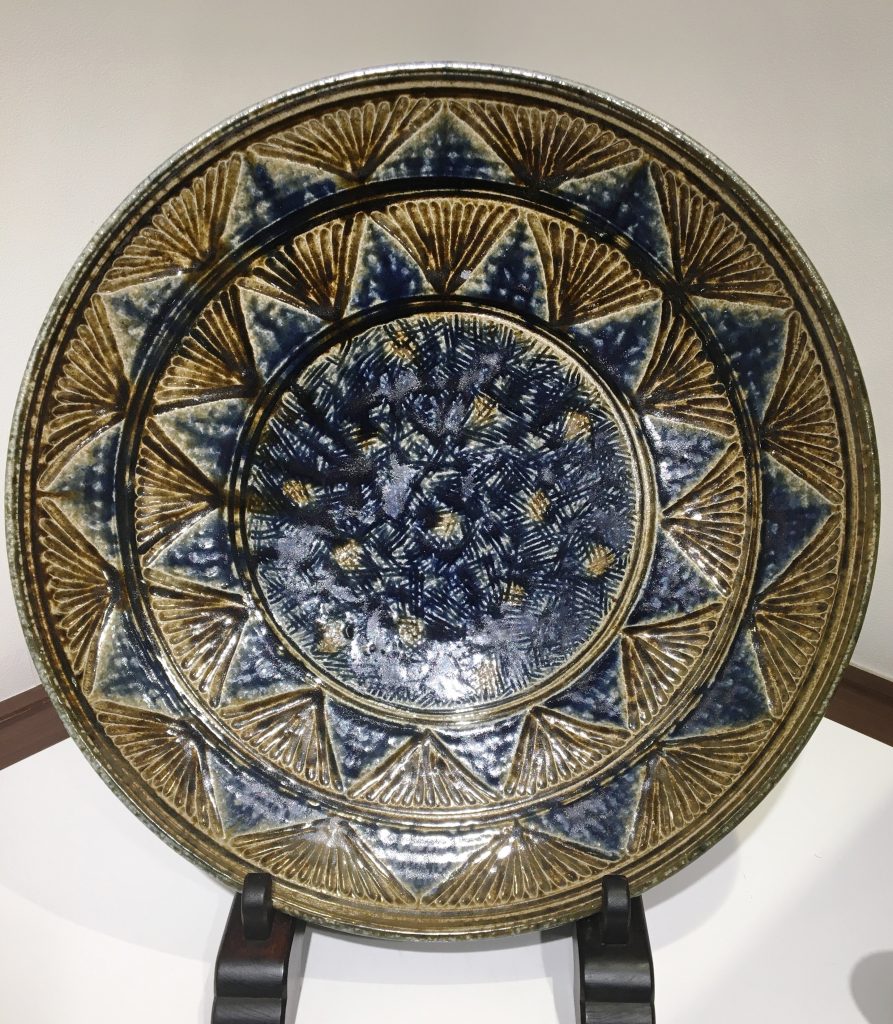 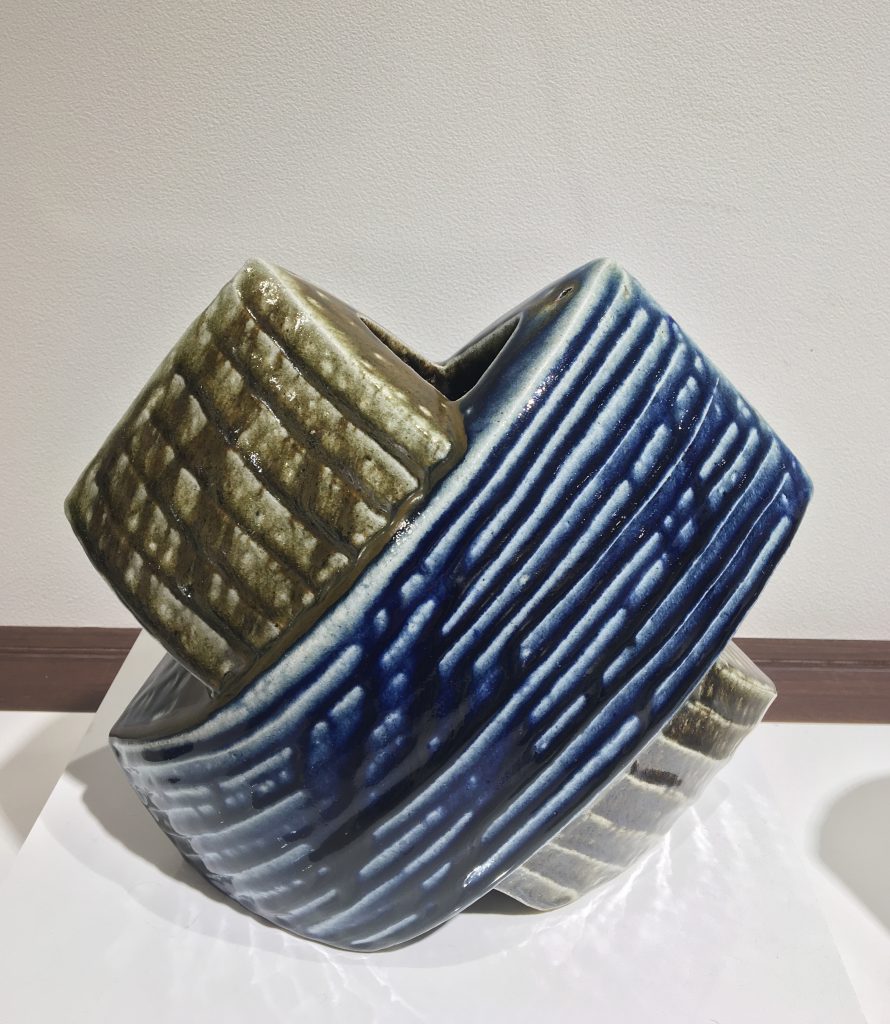 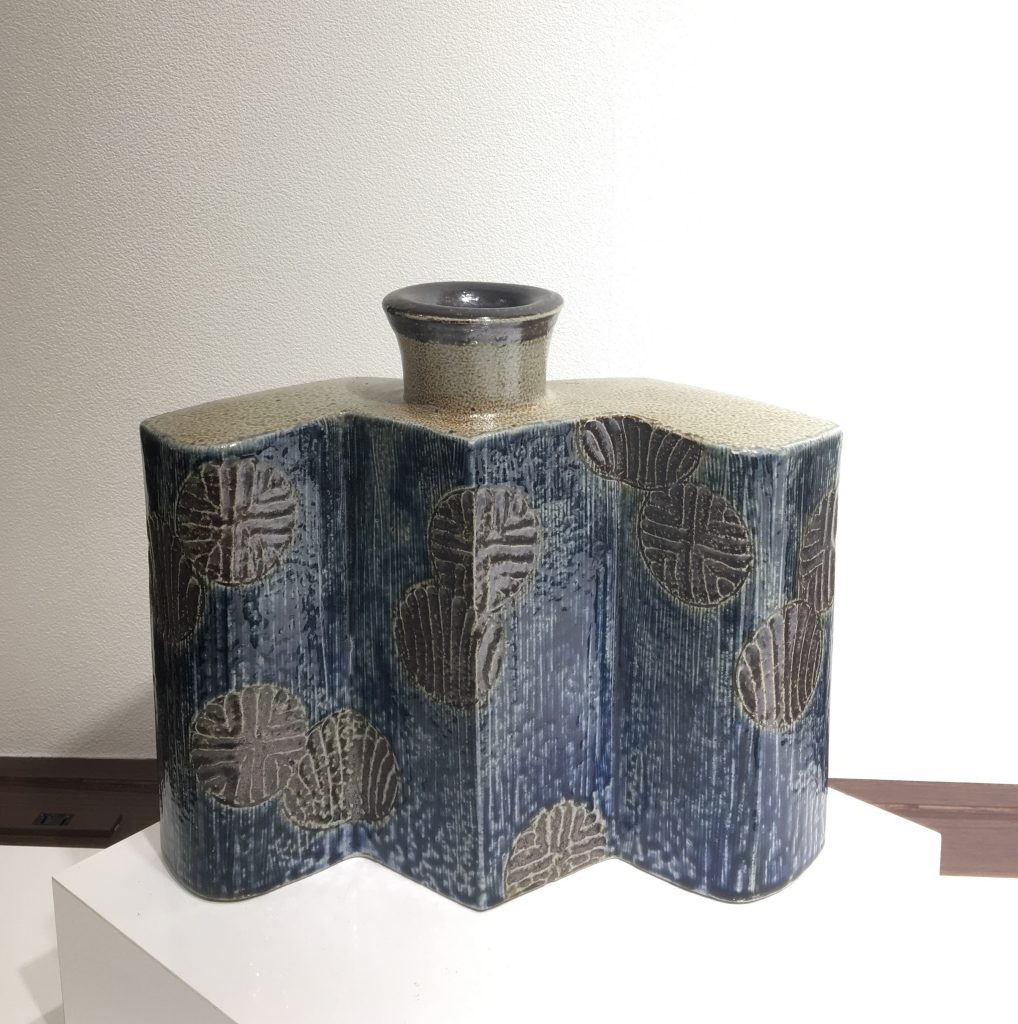 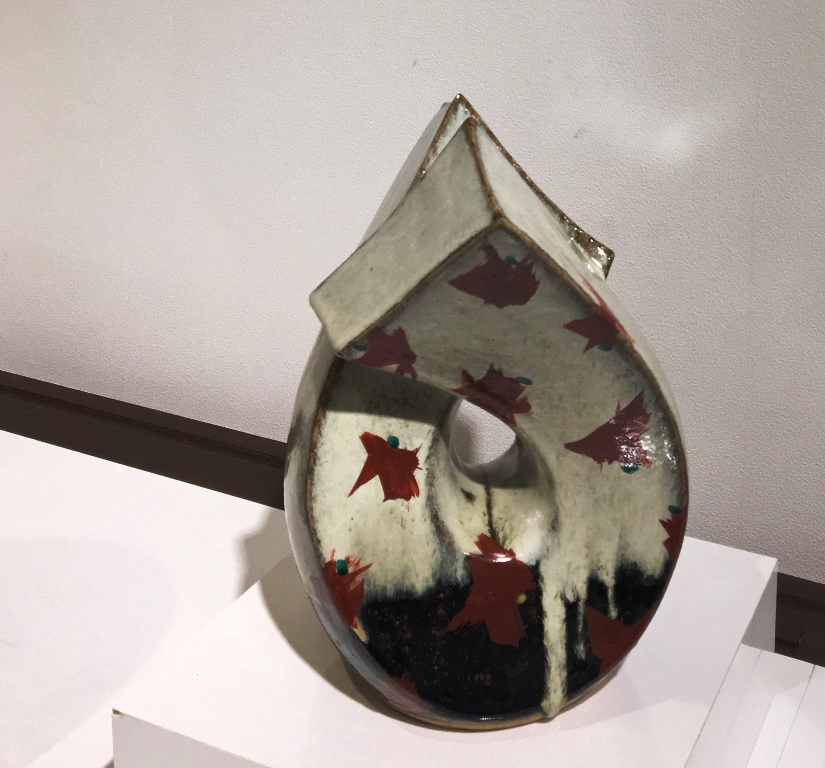 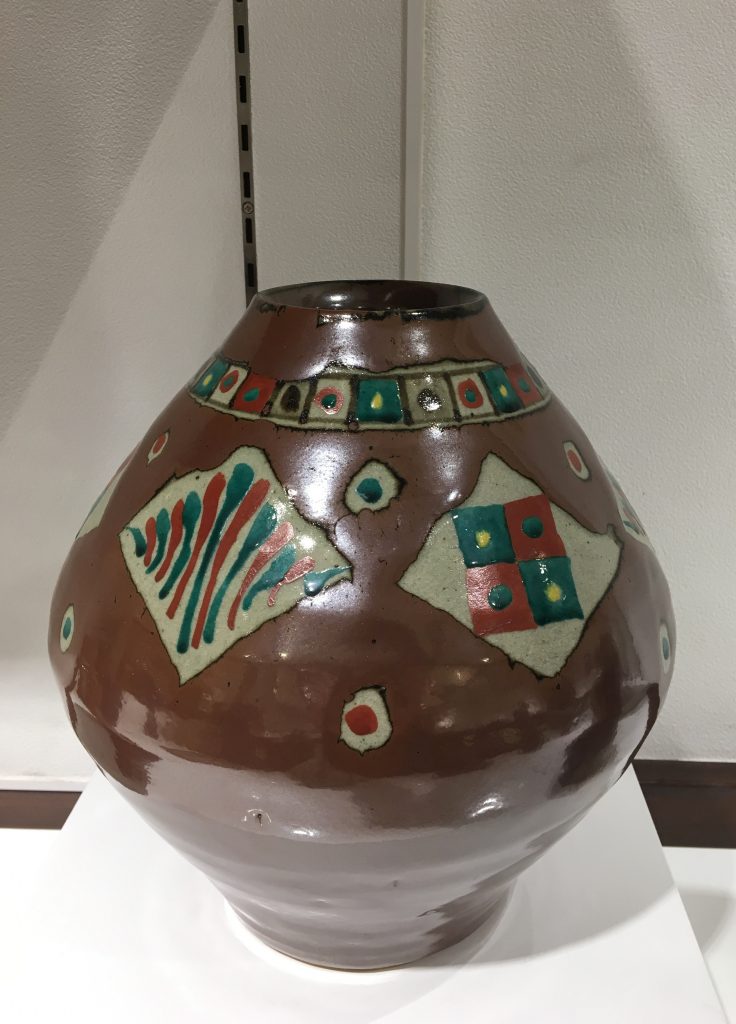 That photo was taken at Hamada’s recent 200-piece exhibition in Osaka. I hadn’t seen his work for quite a while and was very pleased how he has deepened his creations with more refined motifs, sculptural forms and expressive chawan (tea bowls).

Tomoo Hamada’s reputation has reached Mashiko/Mingei ceramics lovers around the world.  He has also traveled to St. Ives, U.K to see Bernard Leach’s kiln where grandfather Shoji, truly one of the world’s greatest ceramic artists, worked in the 1920s! It is deeply reassuring to see traditions transmitted like this over generations and how Tomoo, at the height of his artistic powers, has come forward now as a fresh visionary in the Hamada family.