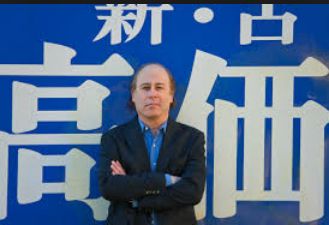 Although prognostication and predicting the future isn’t what we normally do here at the MBR, there’s always exceptions, and this is one.  I’m gonna stick my neck all the way out to the cut-on-the-dotted-line tattoo and forecast the near future.  In about a week and a-half—June 20th to be exact—a new thriller will be released that I think will be the hottest read of the summer season, if not the whole year.  I know, I know, that’s a bold statement, but it’s one helluva bold book.

The Spy Across The Table, (Simon & Schuster, $26.00, 435 pages, ISBN 978-1-4767-9491-4) by Barry Lancet, is the fourth—and most electrifying installment—of his highly acclaimed, widely praised Jim Brodie series of international thriller/mysteries.  Brodie, a San Francisco art dealer specializing in high-end Japanese antiques, just wants to be an ordinary guy, a widower and single parent of a precocious and endearing seven-year old daughter named Jenny . . . but circumstances and a most unique skill-set prevent that from ever happening.  That’s because he grew up in Tokyo, where his father owned an investigative agency.  Brodie’s a martial-arts master, an expert in the art, antiquities, history and culture of Japan . . . and speaks, reads and writes fluent Japanese.  He’s also the half-owner of Brodie Investigative Services in Tokyo and works with the San Francisco Police Department on cases involving Japanese-Americans, or whenever a liaison to their community is needed.

As The Spy Across The Table begins, Jim Brodie is in Washington D.C.  He’s attending a Kabuki play at the Kennedy Center Opera House with Mike Dillman, his college roomie and close friend.  “Mikey,” as Brodie calls him, is a production designer in Hollywood, making sets for the movies.  He’s there to meet Sharon Tanaka, a world-famous designer from Japan, and another Brodie friend and contact.  Brodie himself was there to enjoy the Kabuki art-form and introduce the designers, who’ve never met.  But mere moments after the play begins and the pair are just getting to know each other, an assassin shoots and kills them.  Brodie intercedes, but loses the fight and the gunman—a spanish speaking professional killer—manages his escape, unknown, undetected and unharmed.  Brodie is devastated, vows revenge and is summoned to the White House . . . where he is given a directive he can’t refuse.  The order puts him at odds with the security services of four different nations, puts him in the crosshairs of the most deadly spy in China and puts him physically into a place he probably won’t survive, all while trying to rescue a hostage whose mind contains enough coding secrets to unlock the deepest vaults of American’s NSA super computers.  Her name is Anna . . . and she’s the only daughter of Sharon Tanaka.  The action, and the mystery starts with the first sentence . . . Mikey was shot because he begged me for a favor and I complied . . . then expands, deepens and darkens in every chapter thereafter with a twisted intensity that even Niccolo Machiavelli would appreciate.  The threats, suspense, double crosses and heart-stopping thrills never end in this chilling, and realistic masterpiece that could be tomorrow’s international news.  If you’re a fan of Flynn, Meltzer, or Dan Brown, you’ll be all-in with enthusiasm for Barry Lancet and his good guy PI, Jim Brodie.  He’s tough, unusual, honest and absolutely awesome!

John Dwaine McKenna is an award-winning author, reviewer, commentator, and lecturer living in southern Colorado.  His weekly column:  The Mysterious Book Report, appears in the Tri-Valley Townsman, a regional newspaper published in Sullivan County, New York.  He’s online at: Mysteriousbookreport.com, and Johndwainemckenna.com, as well as on Amazon, Facebook, Goodreads, Instagram, and Twitter.  He has three prize-winning crime-fiction works to his credit: The Neversink Chronicles, The Whim-Wham Man, and Colorado Noir.  Currently, he’s working on his latest, a historical fiction crime novel entitled Unforsaken set in the year 1901 which features a woman who’s searching for her missing brother and a hard-boiled but conflicted Texas Ranger. The plot is backstoried by the passing of the old west and the coming of the modern 20th century.  Expected in late fall of 2018.