Blue above then blue below. Viewed from just below the pass at Mt Mokoto on the northern rim of the Kussharo Caldera, a low sea of cloud blankets Kussharo-ko, Japan’s largest caldera lake, from view. Beyond the rugged, forested far rim of the caldera to the southwest rises the peak of Mt O-Akan, while closer at hand to the southeast sulphurous steam billows from the Iwo-zan vents. Carpeting the foreground, a swathe of dwarf bamboo, lush in its yellow-fringed greenery, is dotted with majestic and hardy Erman’s Birches completing the breath-taking scene beneath an azure sky wreathed in cumulus.

The road, descending beyond the Mokoto Pass, unwinds a steep, meandering path, first through mixed montane forest then more gently down to the undulating lowlands and through the well-farmed, rich loamy soils of the coastal plain and on towards the coast. Beyond the port city of Abashiri lies the Sea of Okhotsk, and our destination for the day.

The almost entirely land-locked Sea of Okhotsk is bordered on three sides by Russia (to the west, north and east), but Hokkaido provides its southern margin. In early winter, looking northwards from the Hokkaido shore, the Sea of Okhotsk appears wild and forebidding. Its leaden frigid waters, so often storm tossed, seem to await the brilliant white winter coverlet that arrives after the turn of the year in the form of jumbled sea ice. That ice will cover the bay beyond Abashiri so thickly and so completely that the whole gulf will glisten, reflecting and magnifying the wan winter sunlight creating a magnificent auroral glow. Today, that glow and that sunlight are in a different realm. It is summer now, just past the solstice, and on an almost flat calm day what glistens out on the bay is not sun-reflecting ice, but instead faint ripples on the blue sea interspersed with bursts of life. Blue below and blue above. 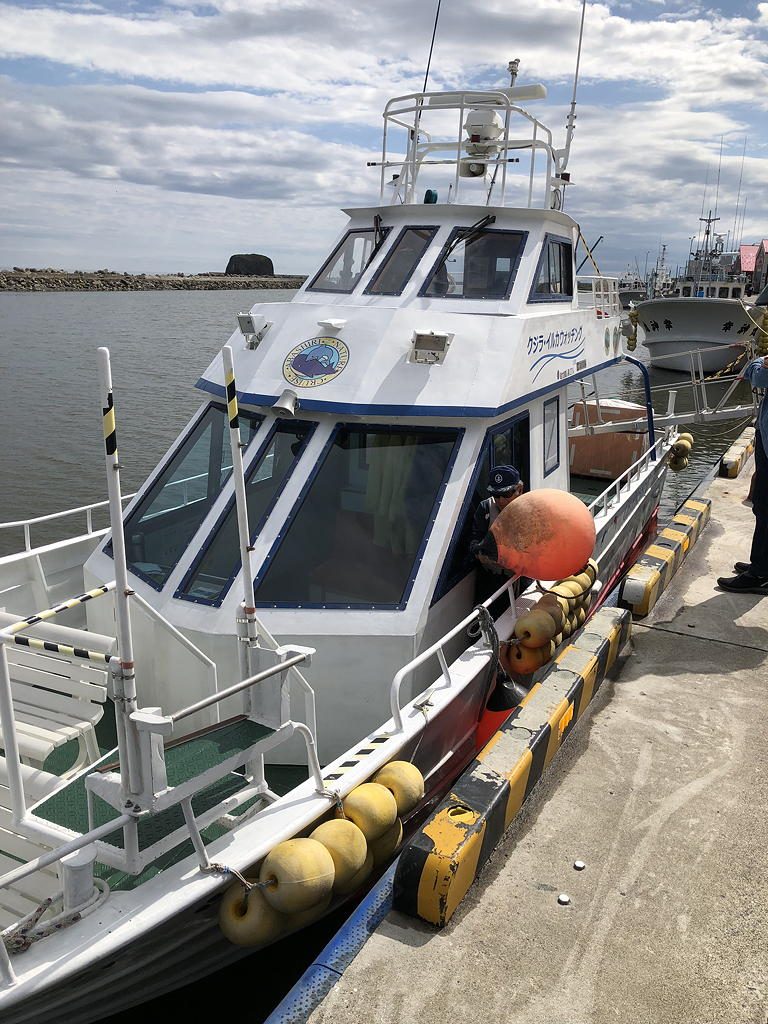 Mayumi, our friend Chris Cook, and I are a trio of naturalists in search of marine life, and with captain Maeda of the Chipashiri in charge, we are heading out into the bay for an Abashiri Nature Cruise. Mayumi and I have experienced the delights of the bay before, but for Chris it is a new experience and he has been well warned that when it comes to whale watching there are no guarantees. 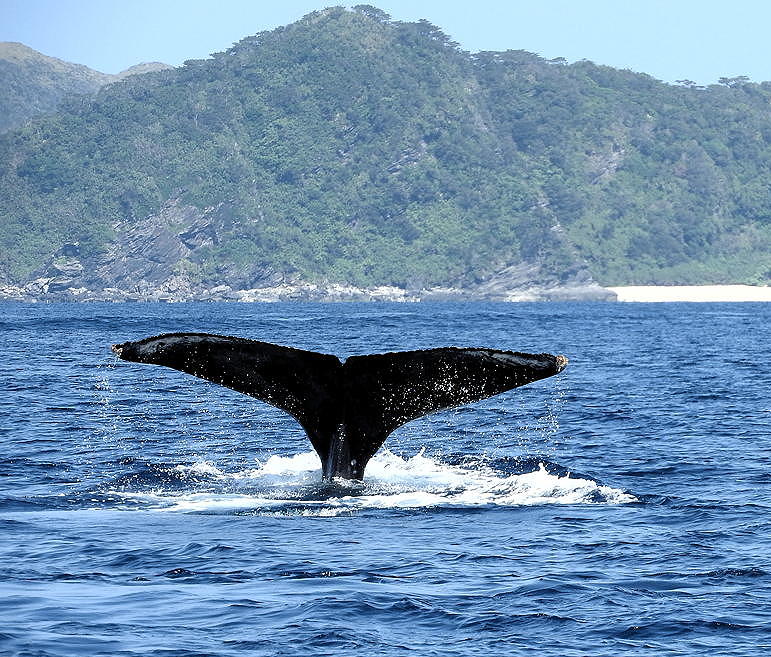 Just over two years ago, seeing Humpback Whales for the first time off Okinawa’s Kerama Islands (Wild Watch March 2016) was such a delight that Mayumi and I were prompted to return there again in spring 2017. Humpback Whales are the most dramatically active and visible of all cetaceans making them the perfect attraction for novices at sea and giving Okinawa’s Kerama Islands and Ogasawara’s Chichi-jima and Haha-jima an unfair advantage over other whale watching sites in Japan. The Kerama Islands have a further unfair advantage over the Ogasawara Islands in that they are more easily accessible for those like us with limited time. That said, it is now possible to go whale watching at a host of locations around Japan from Muroran in southwest Hokkaido to Haha-jima, and from Shiretoko in northeast Hokkaido to the Kerama Islands, giving whale watchers in Japan the opportunity to look for more than twenty species of cetaceans from an array of whale watching centres, and to find a whale watching opportunity nearby.

Now we are very much closer to home than the Kerama Islands. No flights required. Our journey to Abashiri has taken just over an hour and we are excitedly heading out to sea, binoculars at the ready in the hope of seabirds and cetaceans, and in particular the Northern Minke Whale. 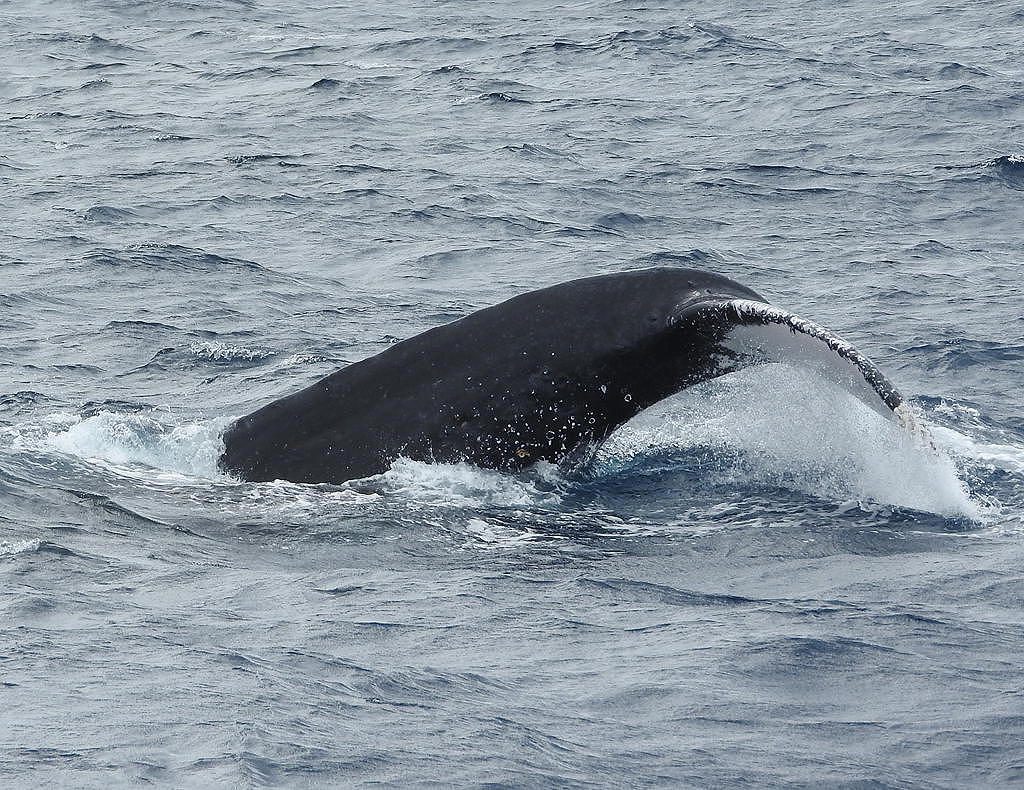 Whale blows, the spouts, gouts and mists of moisture with which each large cetacean signals its return to the interface with the air are something I have been thrilled to watch from the Arctic to Antarctica. While the power of the blow itself, its height, its angle and its structure (whether vertical, bushy or something in between) are giveaway features helping in the identification of each species, the lesser rorqual off Abashiri, the Northern Minke Whale, seems to produce little or no visible exhalation. Unlike the far more massive and demonstrative Humpback WhaleMegaptera novaeangliae, which lunges to the sea surface, spy hops, slaps its four to five metre long pectoral fins repeatedly on the surface sending great splashes into the air, and reveals the four metre spread of its great tail flukes before diving deeply (often to the audible whoops and whistles of excited whale onlookers), the Minke is a very different kind of creature, fast, sleek and elusive, and we must look long and hard in the hopes of spotting one.

I take all captains’ tales of the likelihood of whale sightings with a large pinch of salt, and today is no exception. Watching wildlife is very much a hit or miss affair. It is best to be prepared for long hours scouring the horizon and near waters and to be well-prepared for disappointment, after all cetaceans spend almost all of their lives beneath the waves, rendering them almost entirely invisible to the average watcher.

With the sun shining on Mt Shari and beyond that on the Shiretoko Peninsula clearly visible in the distance, we head out of the harbour. The sea surface is barely ruffled, which provides us with perfect opportunities for spotting anything in or on the water. Amazingly, within ten minutes of leaving our berth we spot splashes ahead and catch glimpses of several fast-moving creatures surging through the water. Within fifteen minutes we have not only clearly sighted the creatures, but have also confirmed their identities as Pacific White-sided Dolphins – the common dolphin of these waters. Had we been in the warm southern waters off the Ogasawara Islands we might have been watching very different dolphins, such as bottlenosed, spinner, or spotted, but up here in the north the two commonest small cetacean species are the energetic Pacific White-sided Dolphin and the even speedier Dall’s Porpoise. 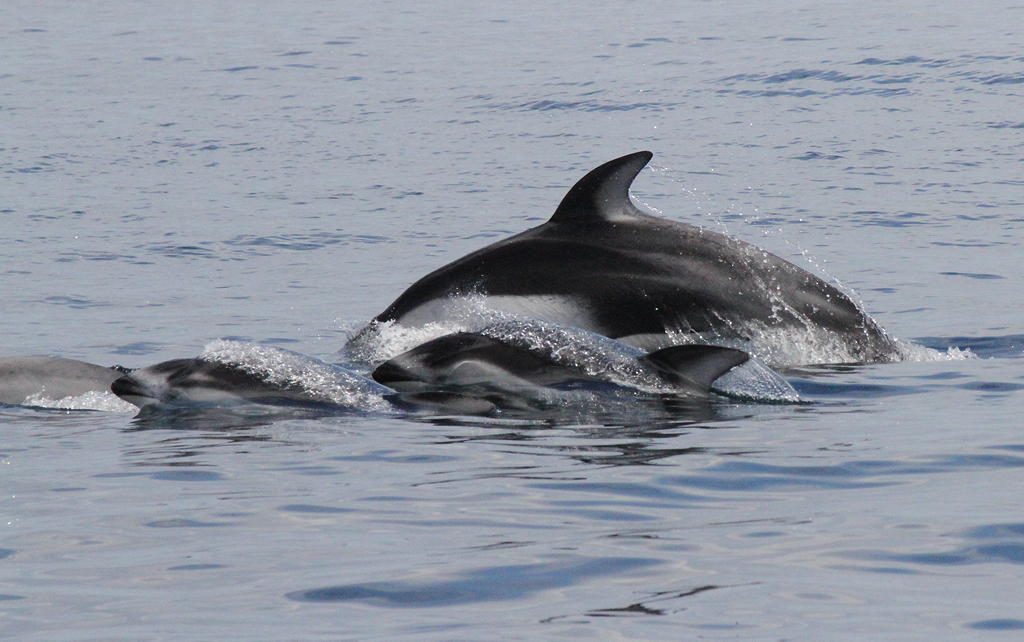 Soon, dolphins surround us; they hare in, some leaping in our wake, some riding our bow wave and often take station on either side of us simultaneously, escorting us like a marine honour guard. The trick for any boat captain in these situations is to keep us close, but not too close; to watch the behaviour of the animals and to discern in which direction they are really heading so as to ensure not to impede their progress. Approaching them from astern or abaft the beam is crucial so as not to disturb or drive them. Our captain, himself previously a whaleboat captain, does a masterful job of allowing us multiple close sightings without ever harassing the animals, but of course the dolphins know nothing of the rules and soon there is chaos in the water with as many as 200 dolphins sporting around us in all directions. Some have come in so close as to make it necessary for us to lean out over the bow to look down on them playing in the waves that our bow pushes forwards. 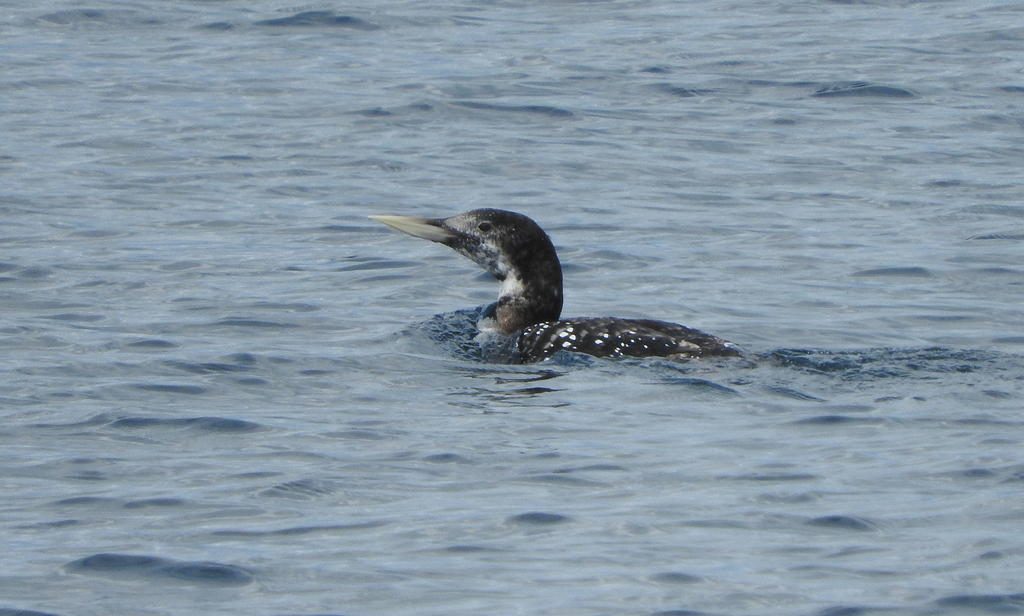 Satiated with our exhilarating dolphin sightings we eventually turn eastwards in search of our main blubbery quarry, but we are soon distracted by a pair of birds loafing on the water, closer inspection reveals them to be something quite unexpected and a rarity at this time of year – a pair of White-billed Divers, otherwise known as Yellow-billed Loons – a species I have only seen a handful of times in Japanese waters. With such an exciting start we are already commenting to each other that the day has been a complete success, whether we see whales or not, but our captain and his spotter have already sighted our quarry off in the distance and off we set in pursuit. 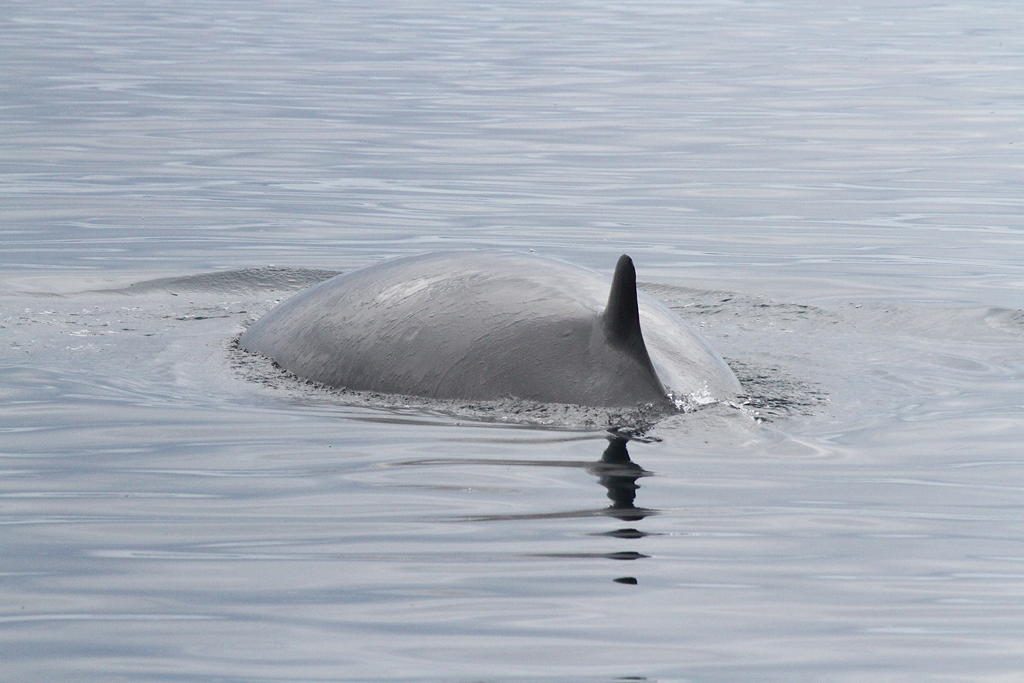 Ahead of us a low mounded back glistens, catching the light and glinting momentarily; then a short falcate fin appears and a split second later the entire animal disappears beneath the surface. In that brief moment it has exhaled and inhaled, recharging its oxygen supply, but more breaths will follow before it next dives to feed, and now we are ready! Spotting Minke Whales is like this, a glimpse here, a brief look there, but eventually we piece together identikit views then, providing the icing on our cetacean cake, they even linger close to us allowing us superb views of all their crucial details. We hear there exhalations, see the water streaming alongside their rostra, note their short pectoral fins (nothing like the long-limbed Humpbacks down south), and watch over and over again as each whale emerges and submerges ahead leading us on an erratic course across the bay. 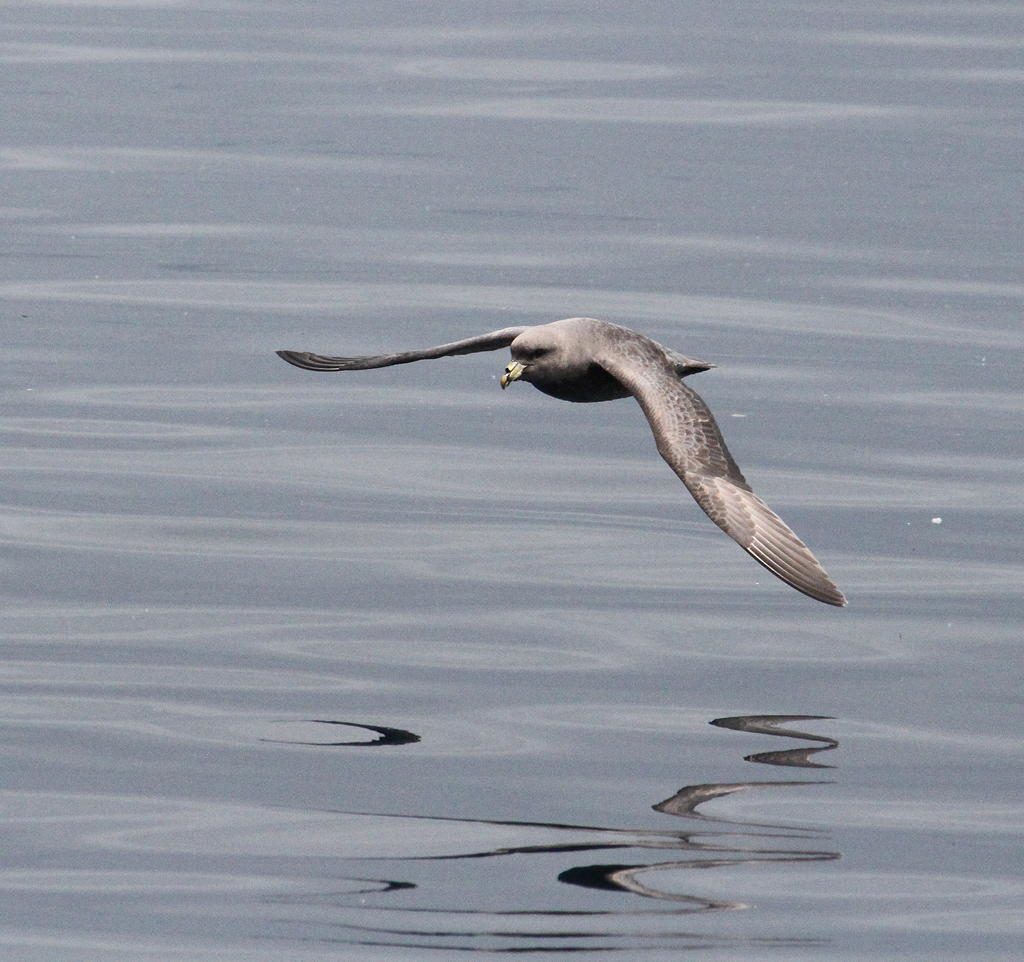 A strengthening wind and a rain squall marching across the bay towards us eventually brings our fun to an end, but by the time we are ready to return to harbour not only are we elated, but we have also tallied no fewer than five Minke Whale, various Dall’s Porpoise, a Harbour Porpoise, more than twenty Black-legged Kittiwake, over a hundred Northern Fulmar, a score or two of Rhinoceros Auklet and hundreds of migratory Short-tailed Shearwaters, not to forgetting those two White-billed Divers.  What a day!

Mark’s latest book, A Field Guide to the Birds of Japan, has just been published (14 June) in the UK. The digital edition was released on 13 July, and the book becomes available internationally from booksellers on 14 August.

If you would like to read more about Japan’s natural (and un-natural) history, then you may enjoy The Nature of Japan: From Dancing Cranes to Flying Fisha collection of Mark’s essays now in its second edition.

Be sure to check out Mark Brazil’s website, Japan Nature Guides http://www.japannatureguides.com/home/

Out and about with Alice Gordenker