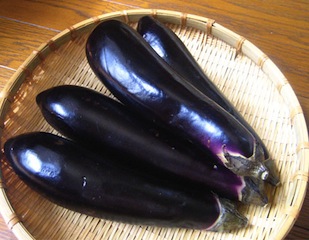 Botanically a fruit, not a vegetable, eggplant (Solanum melongena) is a member of the nightshade family (as is the tomato and potato). Thought to have originated in India thousands of years ago, the Chinese were probably the first to make use of eggplant in a culinary manner. Widely known throughout Asia, eggplant most likely traveled to Japan in the 7th or 8th century A.D. (though it was not eaten by the general populace until a thousand years later). Eggplant appeared in the Mediterranean from about the 9th century A.D. carried there by Arab caravans. Eggplant spread to medieval Europe a bit later with the Moors. Botanist, and third President of the United States (1801-1809), Thomas Jefferson is credited with bringing eggplant to America where it was primarily an ornamental plant until the 20th century. Early varieties of eggplant were smaller and white, resembling eggs, hence the name in English.

The Japanese name, nasu or nasubi probably derived from NATSU MI written as 夏味 “summer flavor” or NATSU MI 夏実 written as “summer seed/fruit.” The eggplant thrives in the hot sun, maturing at the end of summer and on through the fall. Aki nasu, or autumnal eggplants, are especially tasty. And, since eggplant is thought to cool the body (probably due to an unusually high concentration of minerals and phytonutrients in late harvest fruit) it is particularly inviting on days when lingering heat and humidity saps the appetite. 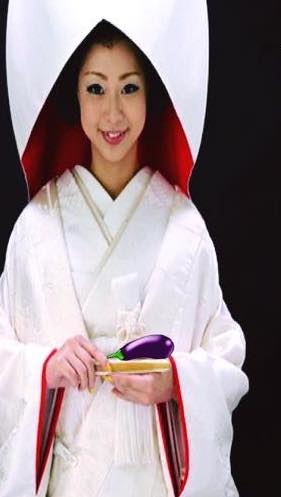 The Japanese have a fondness for kotowaza, or sayings, that embody some kernel of folk wisdom; many use food as a metaphor. The best-known kotowaza concerning eggplants is “Never feed a bride autumnal eggplants…”

For those of you unfamiliar with Japanese mother-in-law jokes you need to know that they are directed not at the wife’s mother, as is typical in America, but at the husband’s. In Japan, daytime talk show hosts commiserate with young brides who are bridled with spiteful shūtomé (mothers-in-law). As a result, most Japanese will tell you that the phrase “Never feed a bride aki nasu…” means that autumnal eggplants are so delicious that young brides don’t deserve them.

Interestingly, there is another, lesser-known interpretation claiming concern for the bride’s health and the family’s future progeny. Since Japanese eggplants are nearly seedless, there is the (symbolic) suggestion that the bride who indulges in the pleasures of eggplant might be “without seed,” in other words, childless. And, even should the marriage be fruitful, eggplant’s cooling effect on bodily functions might lead to a miscarriage. A worried mother-in-law should avoid serving autumnal eggplants to her son’s wife.

A TASTE OF CULTURE culinary arts program combines spicy tidbits of food lore with practical tips and skill-building lessons on how to prepare Japanese food. Programs are conducted in Tokyo, Japan, and offer a unique opportunity for foreign residents and visitors from overseas to explore and enjoy Japan’s culture through its food. Instruction, by Elizabeth Andoh, is in English.

Born, raised and educated in America, Elizabeth Andoh has made Japan her home for more than four decades. A graduate of the University of Michigan (Ann Arbor), Andoh’s formal culinary training was taken at the Yanagihara School of Classical Japanese Cuisine (Tokyo).

Andoh is the author of six books on Japanese cooking, including two IACP award-winners, An Ocean of Flavor (Morrow, 1988) and Washoku (Ten Speed, 2005). She was Gourmet’s Japan correspondent for more than three decades and was a regular contributor to the New York Times travel section for many years. Andoh lectures internationally on Japanese food and culture and directs A Taste of Culture, a culinary program based in Tokyo, Japan.