After 43 years of Blue & White, my eyes only see BLUE. And it may well be that BLUE is taking over the color spectrum. 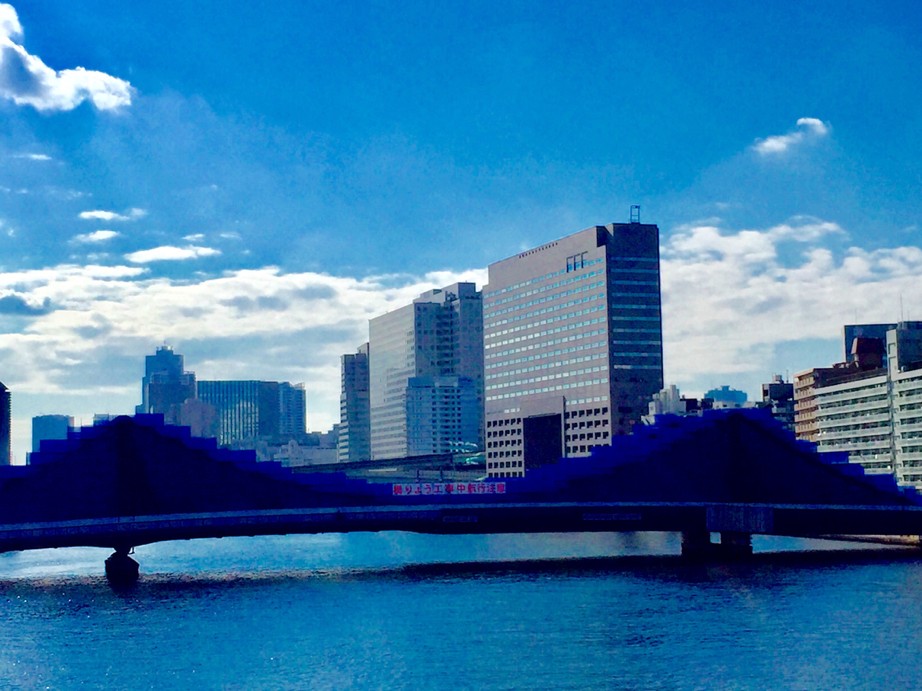 From the skies, to the rivers to the bridges, and even the netting that surrounds them under repair, BLUE is the reigning color
The autumn skies in Japan and in winter are especially blue and vibrant against autumn leaves and snow. 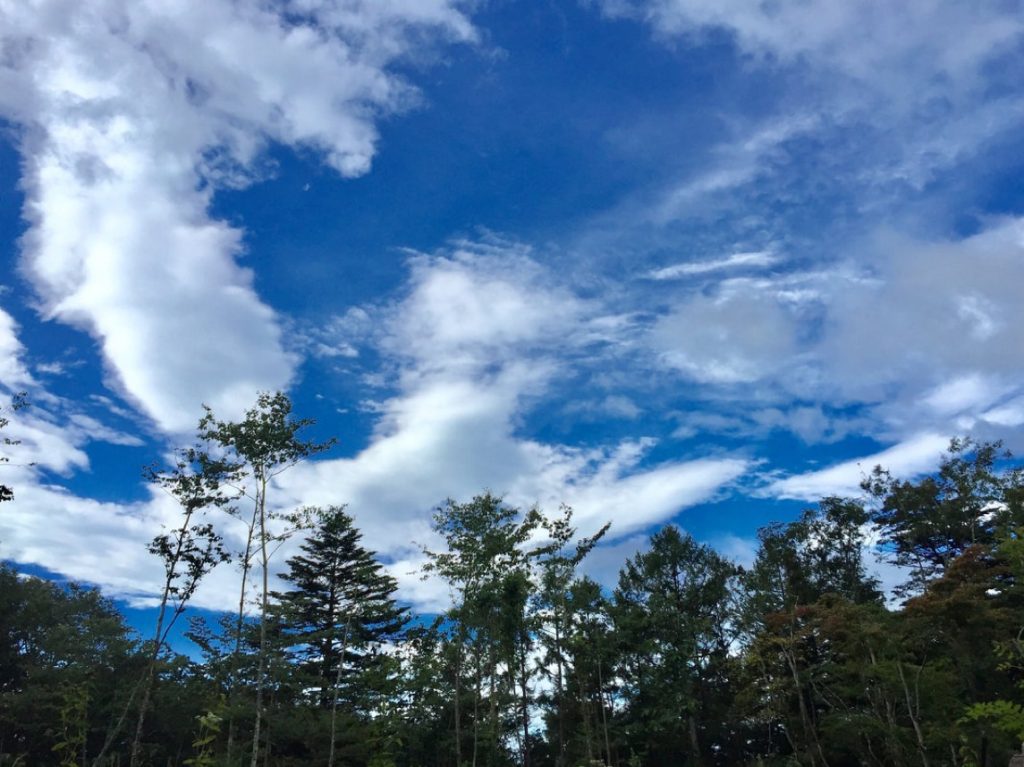 Blue skies of summer are brush work paintings in themselves. August clouds are like no others. Of course, clouds are the best counterpoint to brilliant blue skies. 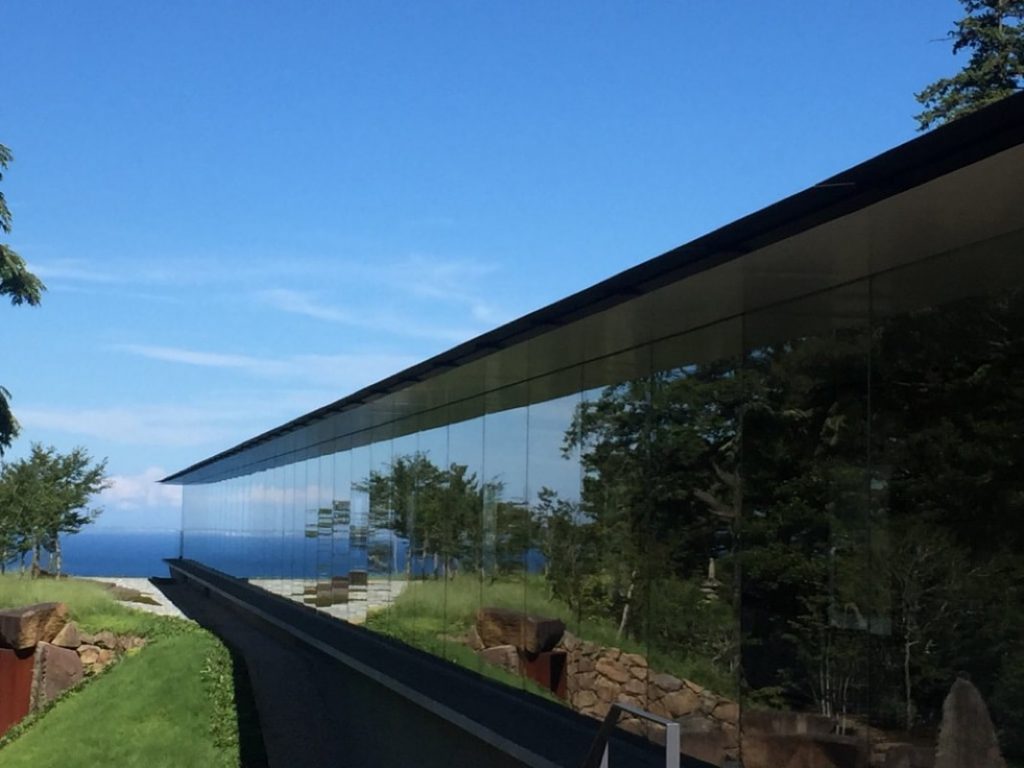 The blues of the sky meet the blue pacific ocean at Enoura, an enchanted sanctuary near Odawara built by photographer Hiroshi Sugimoto from an old mikan plantation, for solstice viewing and to be home to his astounding collection of centuries old stones and bridges, cobblestones and a 14th century gates. A new must visit for travellers to Japan. 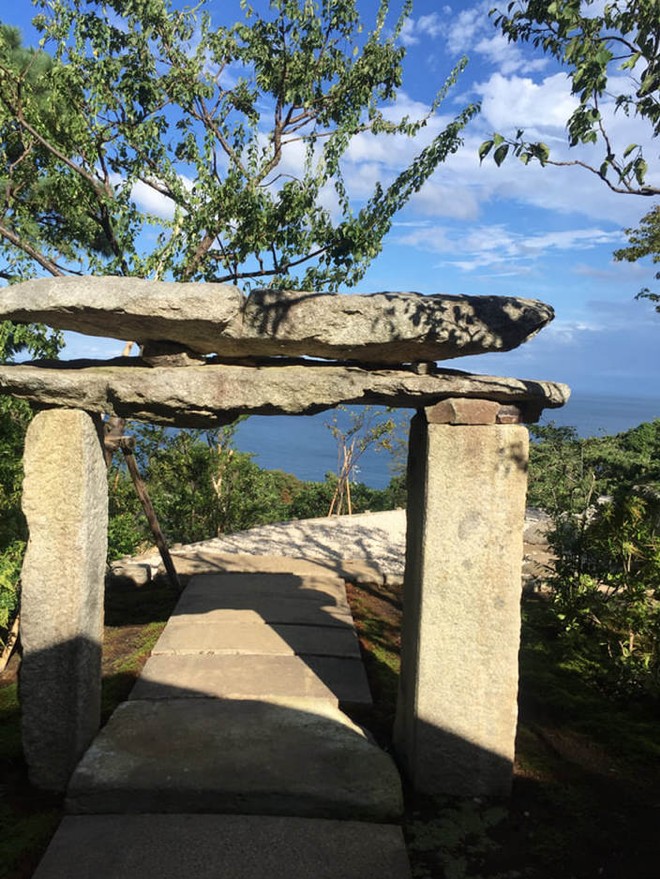 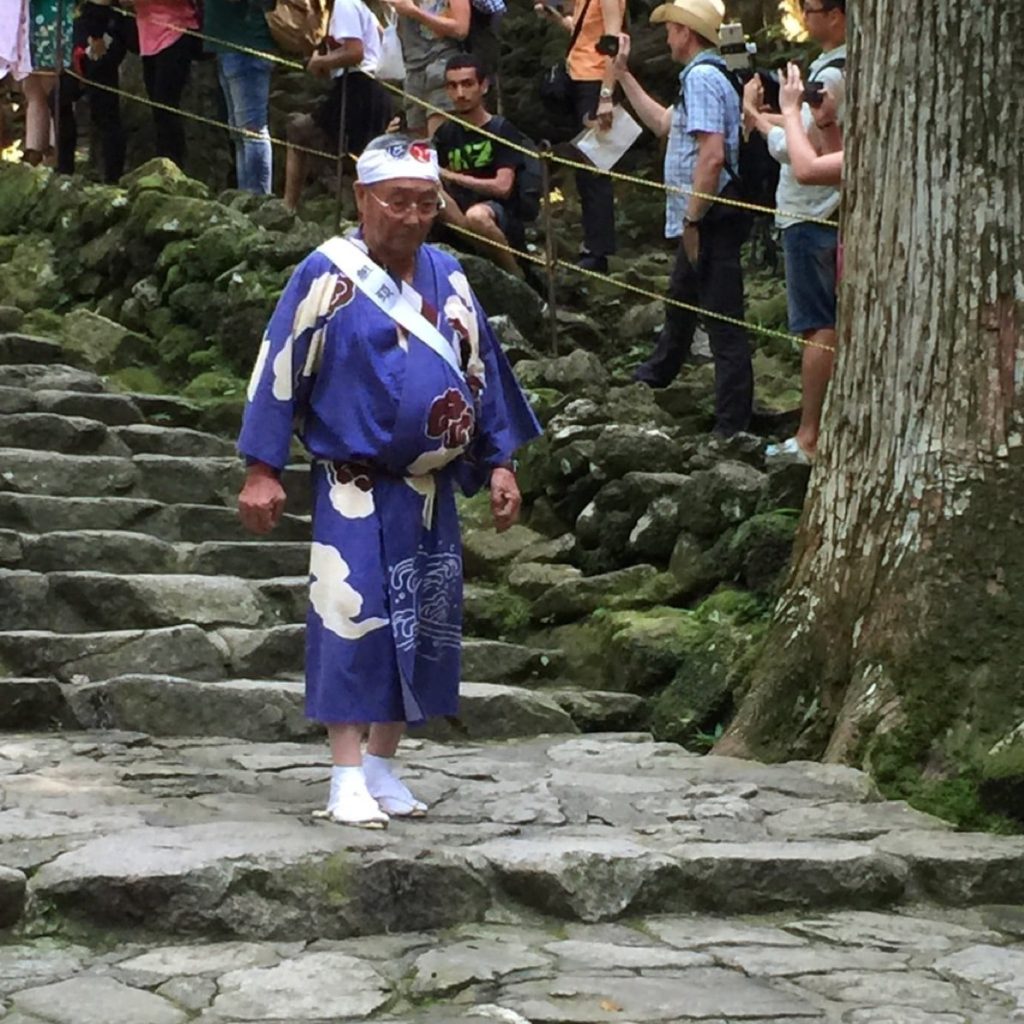 But blue’s not all skies and clouds. People are blue too. This celebrant in blue at the July Kumano Nachi Fire Festival was in strong contrast to the whites of the standard bearers who carried flaming red standards up and down these ancient steps. An incredibly dangerous and thrilling sight 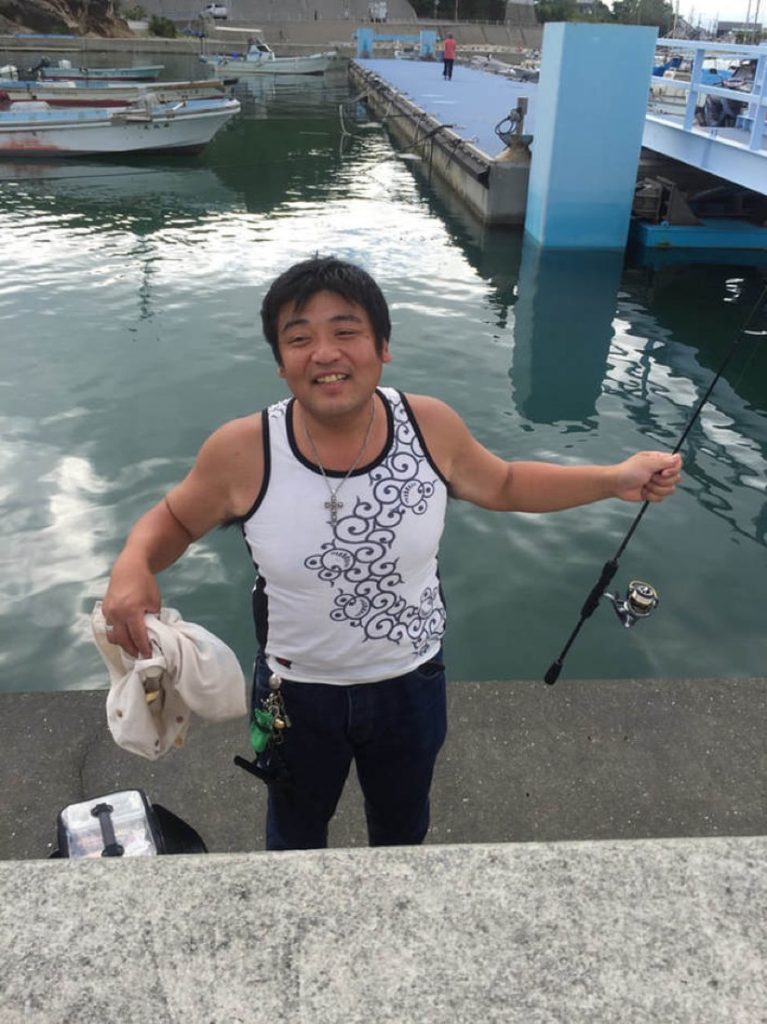 A joyful young fisherman in Naoshima not only just in blue, but in blue karakusa, a favorite scrolling vine design. 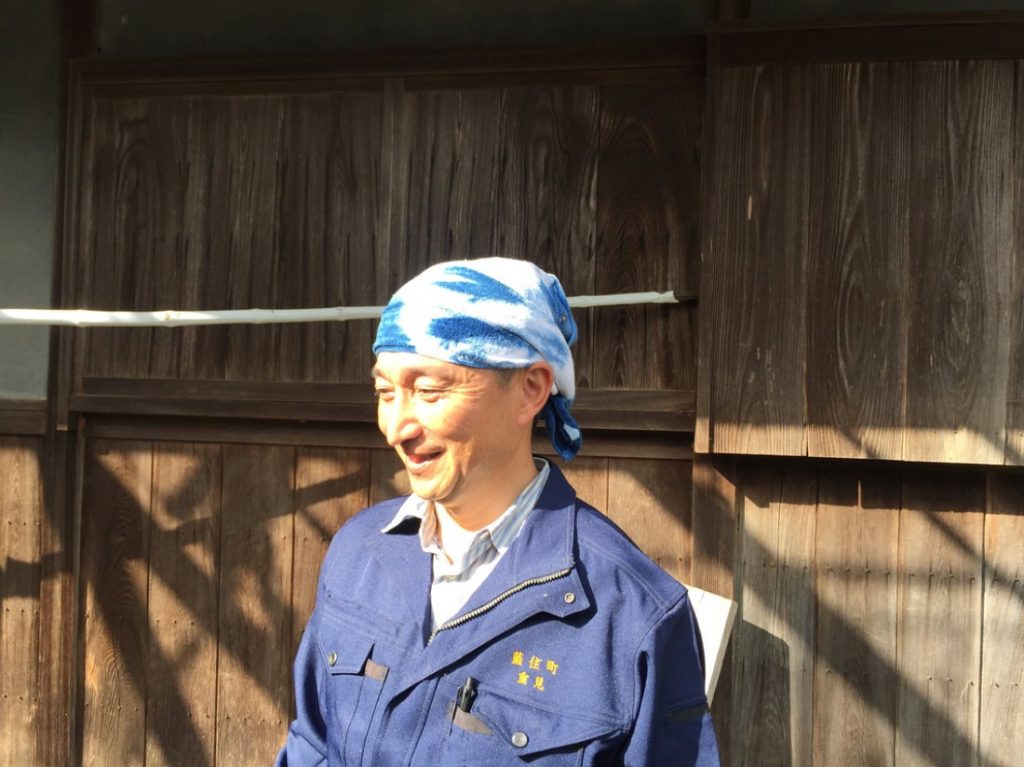 A carpenter in Tokushima wrapped in an indigo dyed towel surveys the extensive damage done by a recent typhoon to a large old walled chieftain’s house in Tokushima that is fortunately a protected cultural property so that some government assistance will help with repairs.
Blue helps him smile, though he has his work cut out for him. 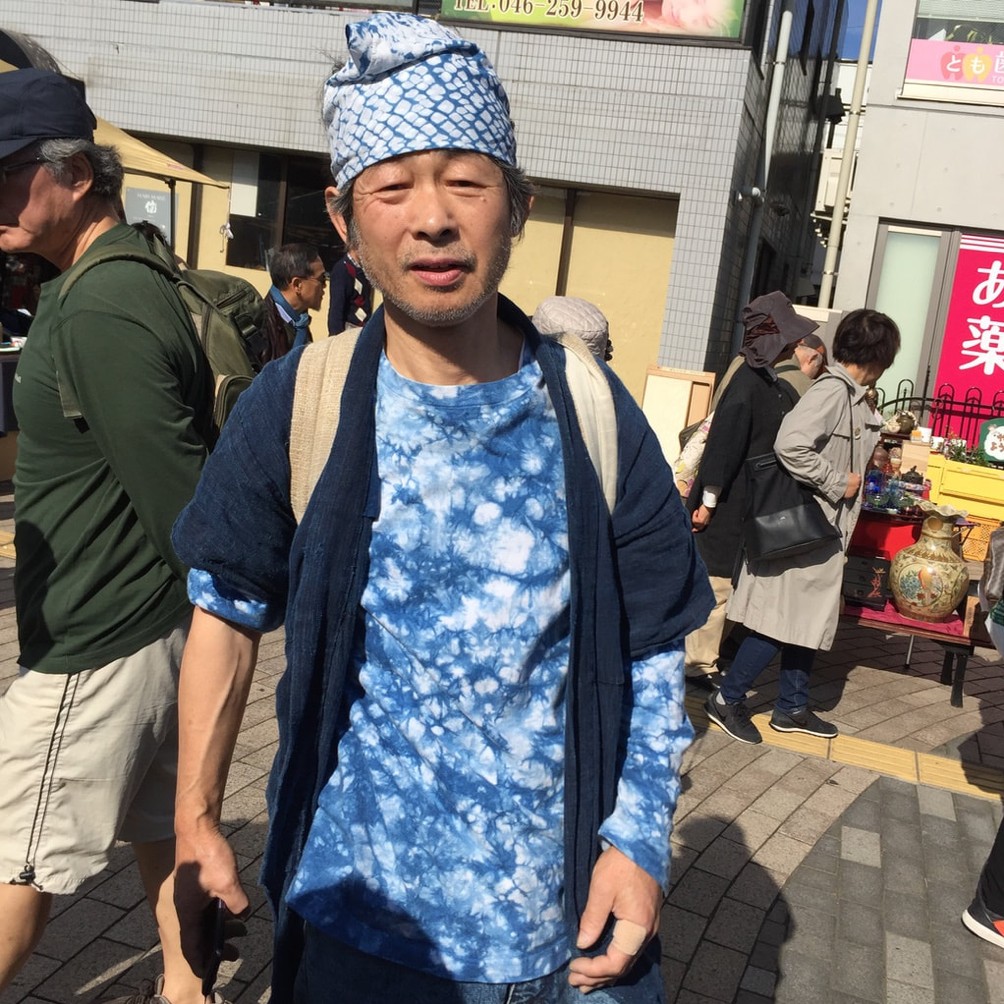 True blue believer at the ultimate Flea Market in Yamato, outside of Tokyo. Everything and anything is there, from junk to treasure, and everything in between. 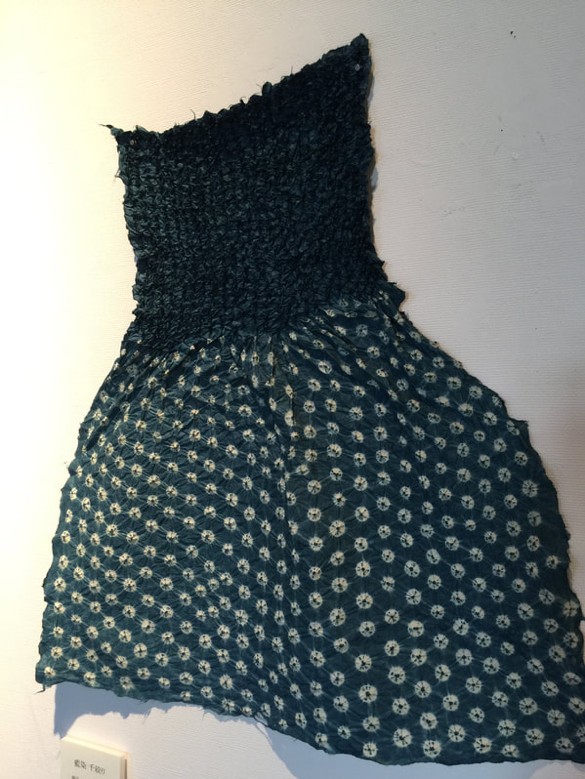 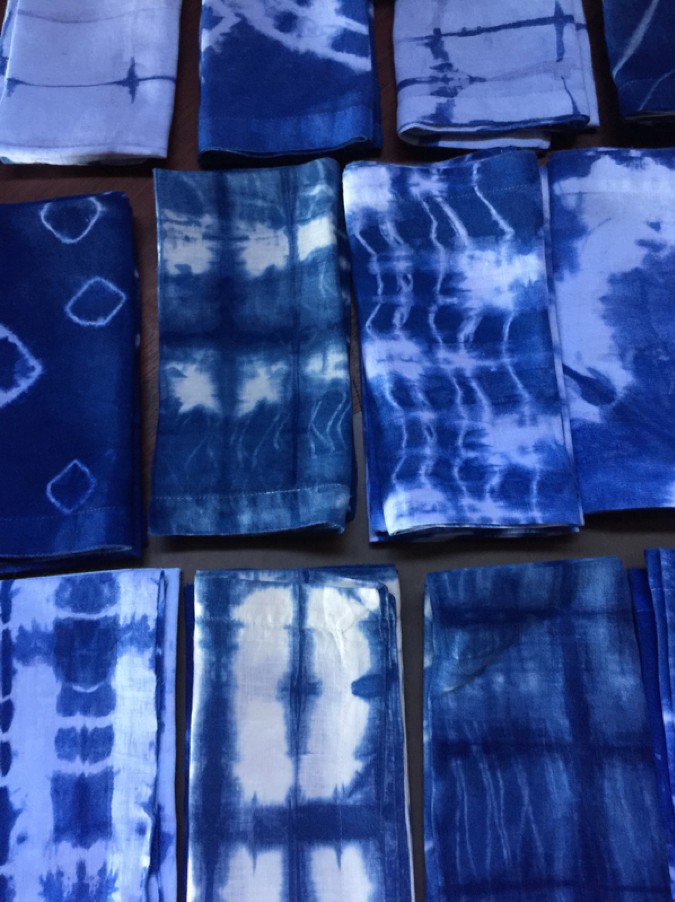 Home dyed swatches of indigo shibori made as Christmas presents for a large family, sit photogenically in the kitchen of multifaceted Dorie Vollum in Portland. 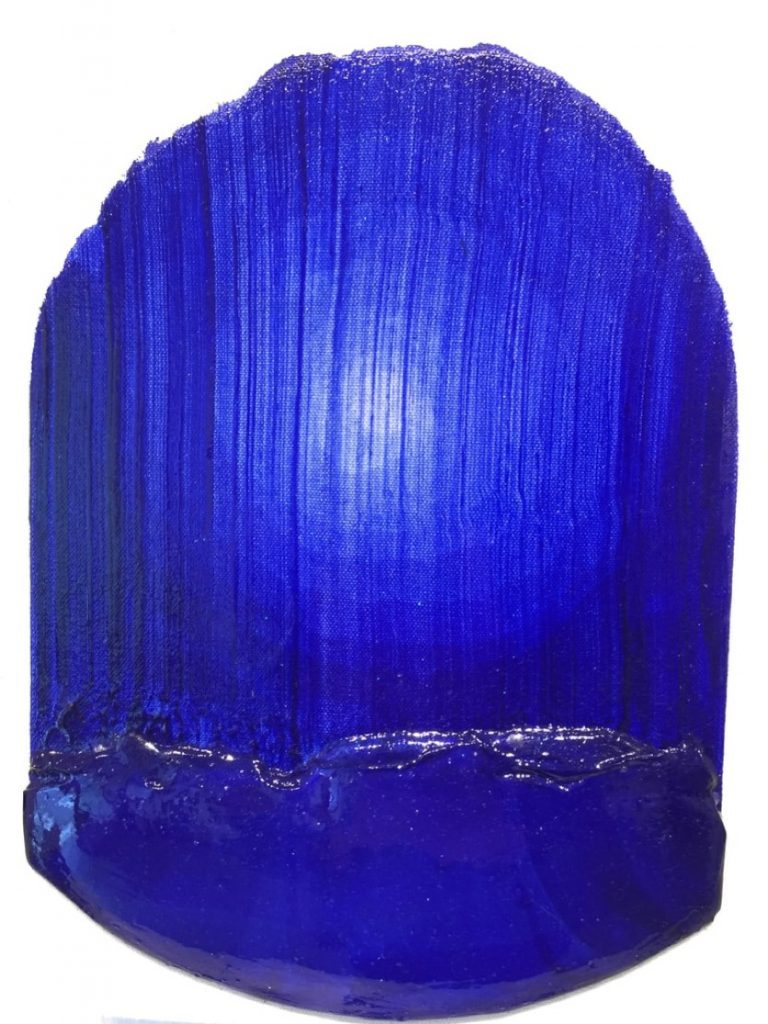 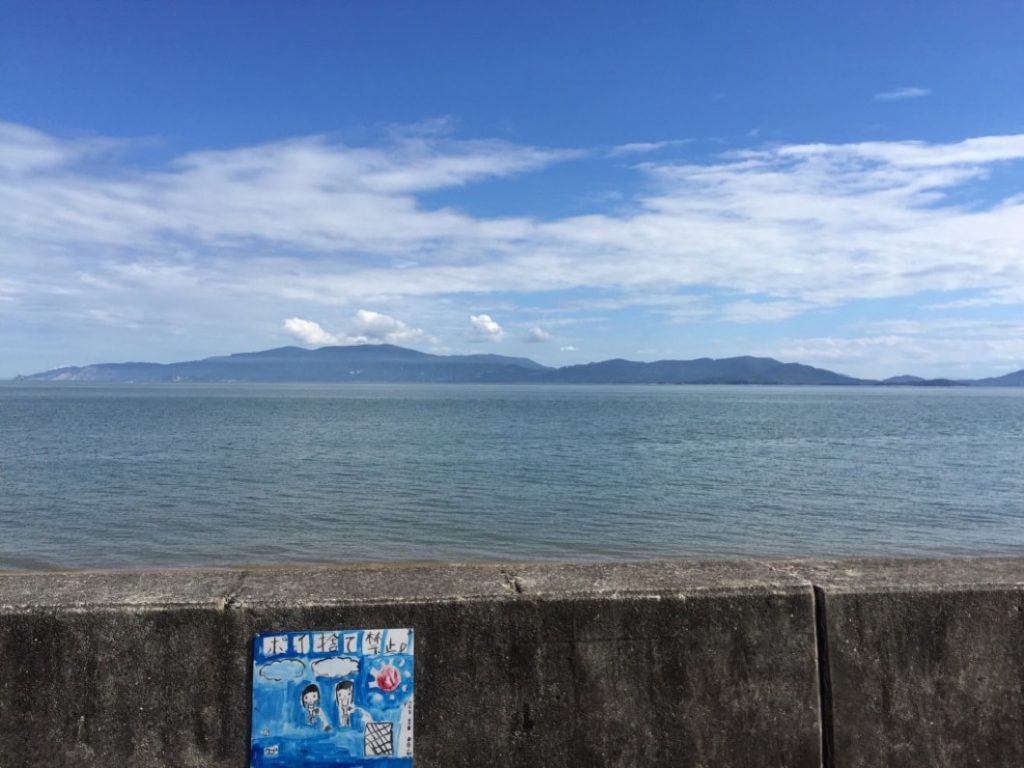 A quiet beach scene at Naoshima, near the bus stop on the way home 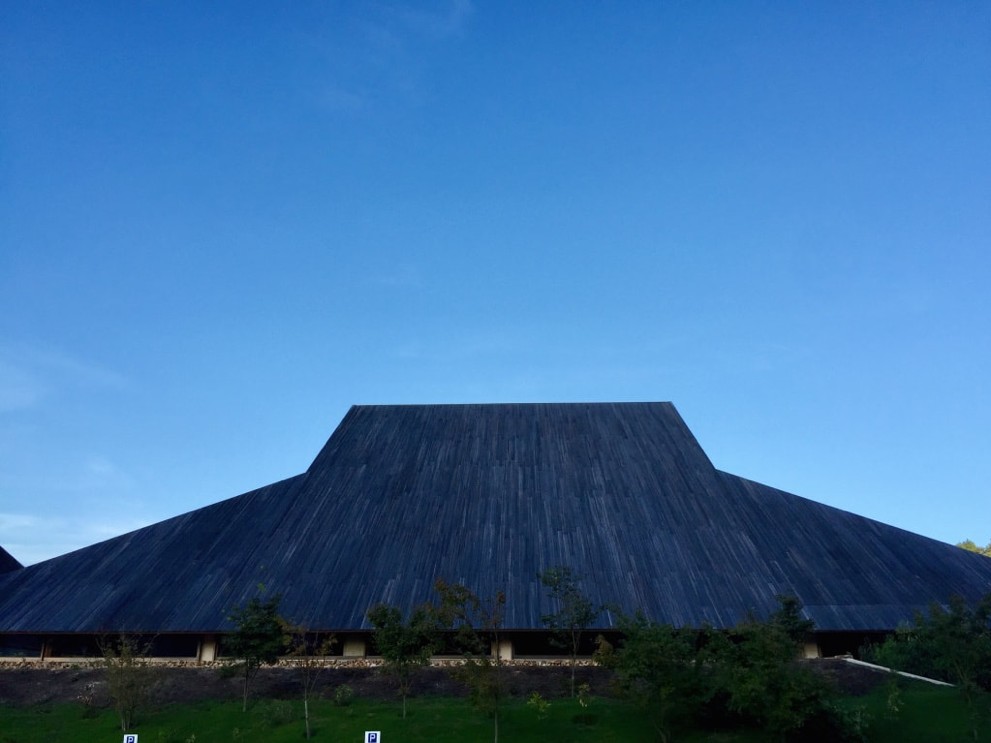 The majestic shape of the roof of the Naoshima Hall was recently designed and built by Hiroshi Sambuichi of Hiroshima whose designs evolve slowly from long consideration of the confluence of the essential elements: sun, wind and water. A magnificent counterpoint to blue. 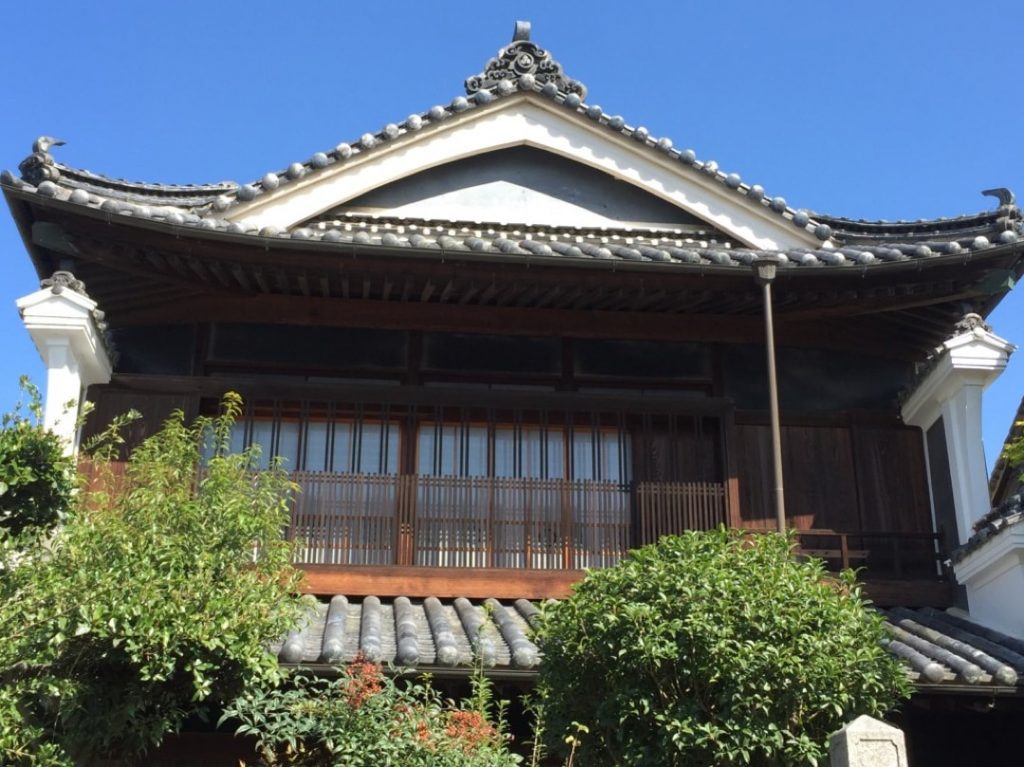 The buildings of the beautifully restored !8th century town of Mima in Tokushima, Japan’s indigo capital, are architectural masteries of carpentry and plasterwork where even the skies are indigo.

Below the Udatsu walls between houses are elegant firewalls of plaster and tile, built to prevent fire from spreading. Uncommonly beautiful craftsmanship against blue skies in the restored town of Mima. Everything looks better against a blue background.

BLUE & WHITE
A LANDMARK IN AZABU JUBAN !
FOR THE BEST OF JAPAN IN BLUE & WHITE TEXTILES AND CERAMICS
Read more blog postings by Amy Katoh on her site : http://blueandwhitetokyo.com 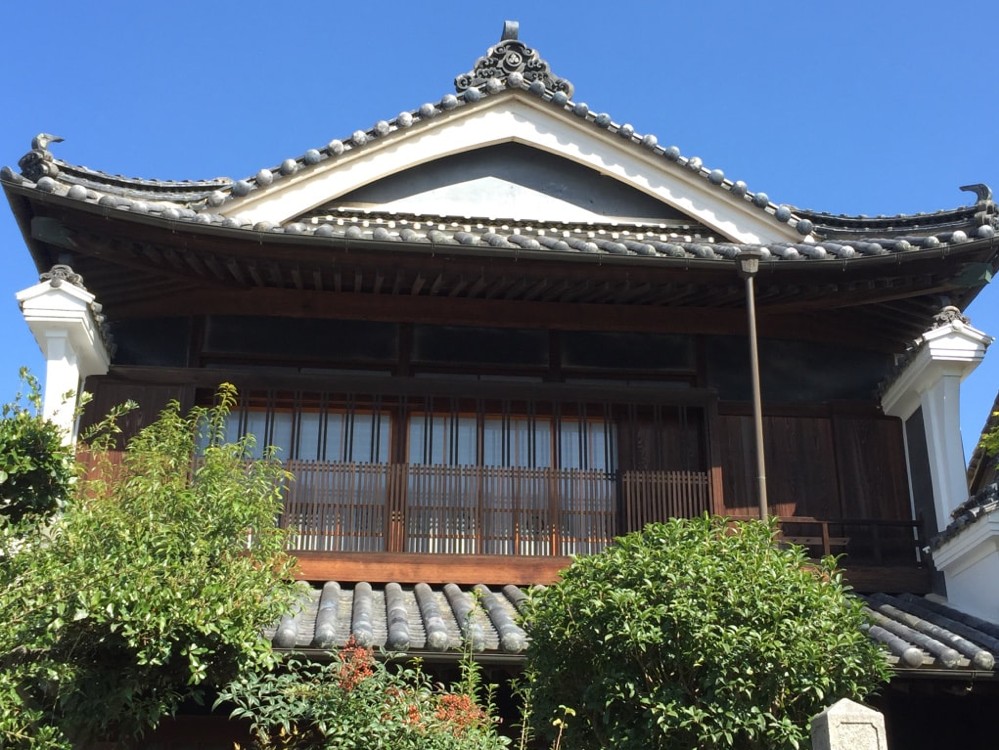 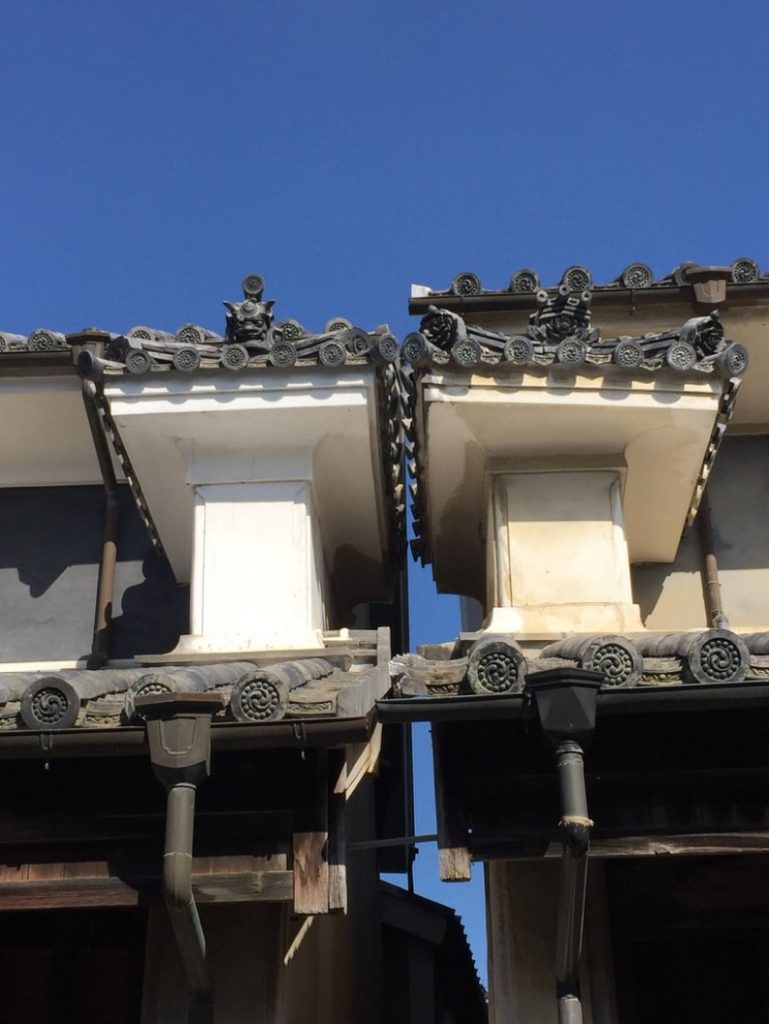 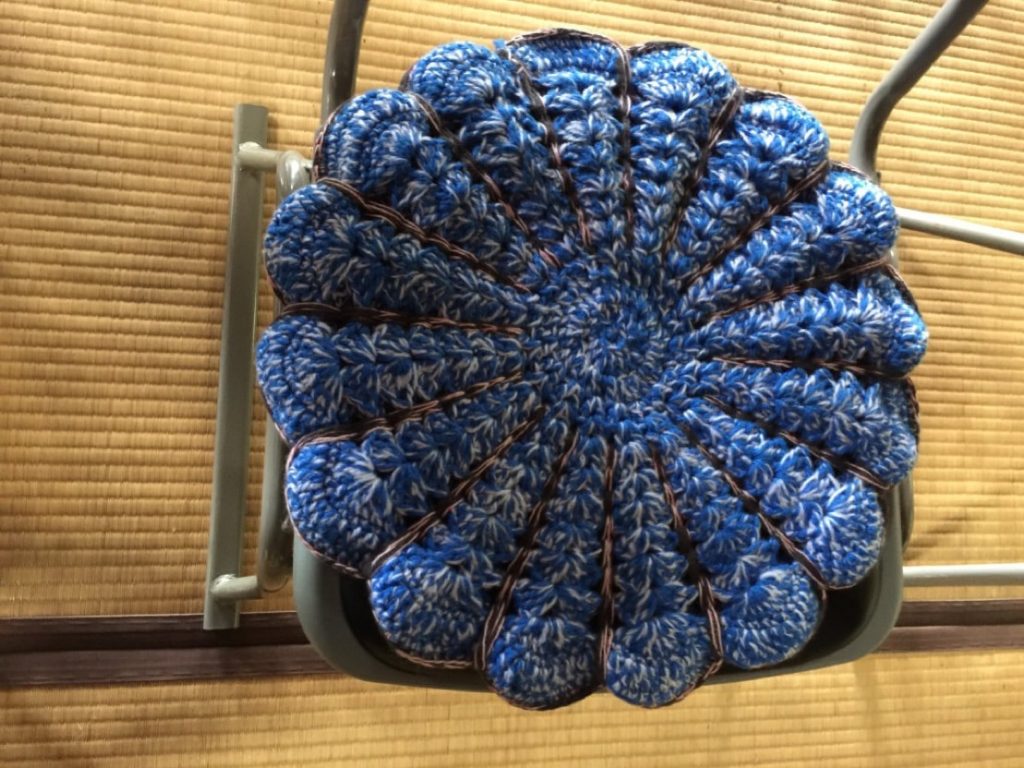 Of all the blues my eyes keep focusing on, one humble one was on a seat cushion of Zuisenji temple in the craftsmen’s town of Inami in Toyama. The ladies of the temple had put their hands to crocheting cushions of all colors in crysanthemum shapes for long prayer services on the spartan chairs in the main hall, but I ONLY HAD EYES FOR BLUE. 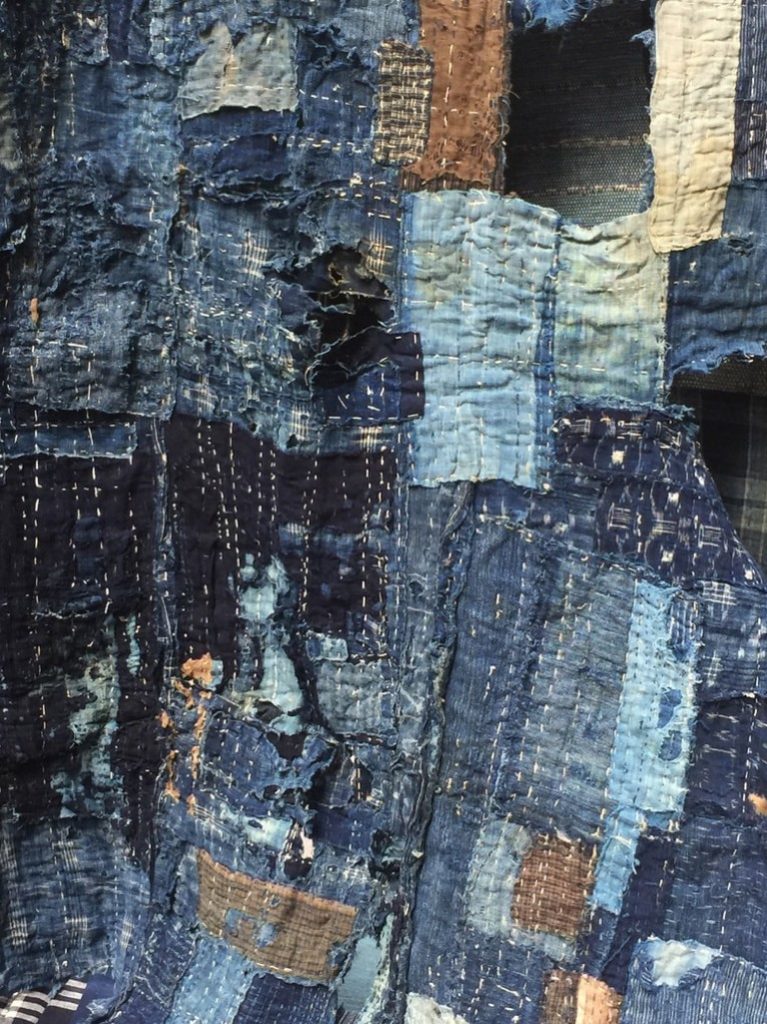 But then again, each time I think I have found The Ultimate Blue, something new/old keeps appearing. And here was a Glorious Blue Boro at the OEdo Antique Market on Sunday December 19 that brought joy to my indigo heart.